Charred 2021 McLaren GT up for sale. The pile of scarp costs ₹1.5 crore

Since the McLaren GT is largely made from carbon fiber, its remains look like chunks of melted and destroyed carbon.There are no details about how the McLaren ended up in such a sorry state.
By : HT Auto Desk
| Updated on: 17 May 2021, 11:59 AM 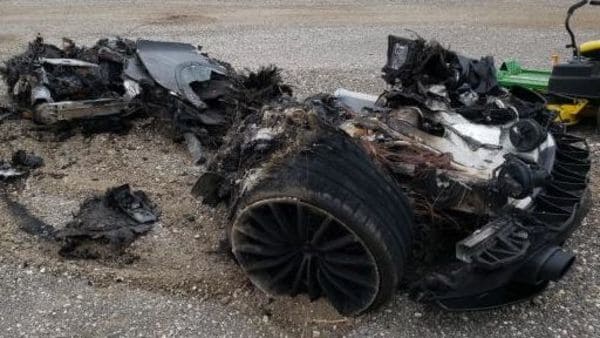 A completely charred 2021 McLaren GT has been listed for sale on US-based used car marketplace Copart. The full-burnt vehicle, located in Texas, is no longer recognizable and its remains look like a pile of scrap. Listed for an estimated retail value of $212,000 ( ₹1.5 crore approx), one would wonder if someone will be willing to pay real money for this.

The primary damage that occurred on what once used to be a McLaren GT is 'burn' while the secondary damage mentioned on the website is 'all over'. Since the McLaren GT is largely made from carbon fiber, its remains look like chunks of melted and destroyed carbon.

There are no details about how the McLaren ended up in such a sorry state but it could have been involved in a crash that led to fire or some issue inside it might have led to its charring. It is also possible that the vehicle could have been caught in a house fire.

However, the damage is such that the remains of the wreckage can be dismissed as waste and be thrown away. The only parts that are identifiable and give away the vehicle's identity are the wheels, the rear diffuser, and the tailpipes.

Copart is known for listing used vehicles that have suffered some kind of damage. Last month, it listed a 2005 Ford GT with a completely deformed shape. The vehicle seemed to have been involved in a heavy fire accident or a crash. The only identifiable components of the vehicle were its two wheels and the engine.