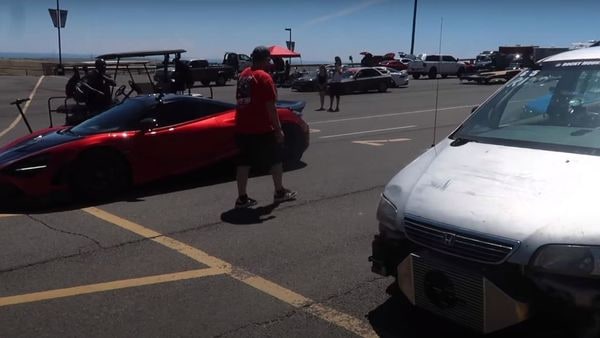 Screengrab from a video posted on Youtube by BoostedBoiz.

In what was a prime example of a David vs Goliath(s) battle on the race track, a Honda Odyssey minivan drove out with major bragging rights by either outpacing or almost matching up to some very capable and super expensive rivals in a series of drag races. In a video posted to Youtube last year, the minivan can be seen challenging the mean boys on wheels and emerging as quite the knockout champion.

Quite obviously, the 1995Honda Odyssey is far from its stock form and has a Honda Prelude-sourced H22 engine at its core, coupled with extremely capable turbochargers. In all, it has a power output of around 1,000hp. And while details of the mechanical upgrades aren't known, this particular Honda is seen setting the race track on fire, nearly even matching the pace of a super slick, super speedy - and super expensive - McLaren 720S.

It isn't everyday that a supercar finds its match in the form of a customized minivan that is upgraded for speed. But this particular Honda Odyssey isn't really one of a kind because there have been instances in the past when this particular model has been tuned up for sheer power and performance. One such modified unit was tuned by Bisimoto and has a V6 engine with a pair of turbochargers for 1,092 hp of peak power.

So, before one dares to dare a rather ungainly family-mover on wheels for a sprint spin, it is important to remember that just as one ought not to judge a book by its cover, don't judge a car till one sees what's under its hood.