It is estimated that the total property damage from the accident is around $ 4 million.The collision reportedly took place when the Bugatti and Porsche both attempted overtaking moves at the same time.
By : HT Auto Desk
| Updated on: 14 Aug 2020, 10:35 AM 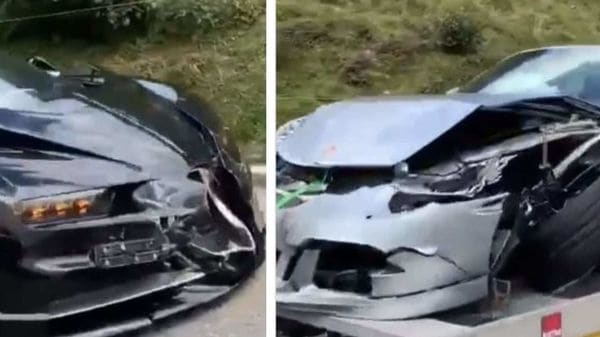 Screengrabs taken from a video posted on Instagram by vdhautomotive

It is always an unfortunate sight to see any car involved in any accident of any magnitude but to see one of world's most expensive cars and another iconic car involved in a crash is especially horrific, considering the buying costs involved. As such, the sight of a banged up Bugatti Chiron and a Porsche convertible went viral on social media recently with many calling it 'an accident worth millions.'

The accident was reported on the Gotthard Pass road earlier this week and involved a Bugatti Chiron, worth around $ 3 million, and a Porsche. According to a local report, the Uri canton police department confirmed one car was trying to overtake the other on the extremely scenic but significantly narrow stretch of road when the accident took place. The reports further quote the police message as saying that the Bugatti attempted to overtake cars in front around the same time that the driver of the Porsche also began executing such a move. This resulted in the sorry and extremely expensive collision.

It is reported that a few other cars, including a Mercedes, were also damaged as a result and at least one person was injured. The total property damage from the entire incident is estimated to be around 3.7 million Swiss Francs (around 4 million dollars).