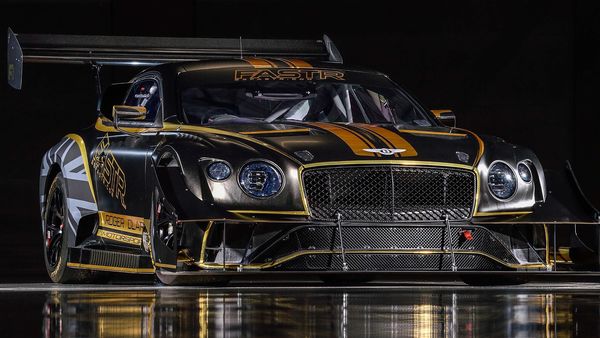 Bentley has unveiled the Continental GT3 Pikes Peak race car that has been designed to compete for the Time Attack 1 record at the Pikes Peak International Hill Climb championship that is scheduled for 27 June of this year. It will be the first competition Bentley to run on renewable fuel as the company aims to switch to sustainable fuels for its Bentley customers around the world.

The modified Continental GT3 will make its way through the 12.42-mile course running on a biofuel-based gasoline. The company is currently testing and evaluating various blends of fuels that can reduce the greenhouse emissions up to 85% over standard fossil fuel. This marks Bentley's first and significant step towards its Beyond 100 strategy that sees the brand becoming the world’s leading sustainable luxury mobility company. Bentley says that its more than 80% vehicles ever built are still on the road and providing its consumers an option of renewable and sustainable fuel will allow its existing customers to enjoy their current Bentleys responsibly for years to come. "The Continental GT3 Pikes Peak will show that renewable fuels can allow motorsport to continue in a responsible way," says Dr Matthias Rabe, Bentley’s Member of the Board for Engineering.

In the Pikes Peak championship, to break the record, the Bentley race car will have to complete the nearly 5,000 ft climb, which includes 156 corners, at an average speed of more than 78 mph to cross the finish line in less than nine minutes and 36 seconds.

To achieve this feat, Bentley has partnered with three-time Pikes Peak champion Rhys Millen (NZ) to drive the race car through the race course. Bentley achieved its two existing Pikes Peak records with Millen with the Production SUV record attained in 2018 with a Bentayga W12, and the outright Production Car record achieved in 2019 with a Continental GT.