Ford Motor's decision to stop making cars in India came as a shock to the auto dealers' body FADA which said the move will result in the biggest financial loss for the dealers of Ford cars.
By : HT Auto Desk
| Updated on: 10 Sep 2021, 08:42 AM 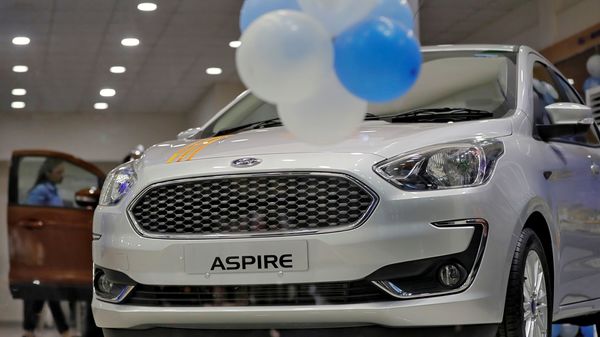 A new Ford Aspire car is on display for sale inside a showroom in New Delhi, India. (File Photo)

As Ford Motor decides to stop making cars in India, the auto dealers' body Federation of Automobile Dealers Associations (FADA) has sought the Centre's intervention to stop foreign carmakers to shut shop unilaterally, leaving its dealer network in quandary. FADA has urged Centre to pass law to protect the dealers from such unforeseen decisions taken by foreign OEMs.

To ensure the dealers linked to Ford Motor, FADA wants the Centre to pass the Franchisee Protection Act as soon as possible. The law, when passed will provide a cushion to dealers in case any OEM decides to shut shop and ship out of India. The demand for this law has been long-standing, especially after three US-based vehicle manufacturers, including General Motors and Harley Davidson took similar decisions in the last few years.

(Also read: Ford Motor may be down, but not completely out in India)

Vinkesh Gulati, President of FADA, said, "FADA has been requesting Government of India to roll out Franchisee Protection Act as due to its unavailability, Auto Dealers are not adequately compensated like their counterparts in Mexico, Brazil, Russia, China, Indonesia, Malaysia, Japan, Italy, Australia, Sweden and many other countries, where this law exists. After General Motors, Man Trucks, Harley Davidson, UM Lohia and multiple fly by night Electric Vehicle Players, Ford India is the 5th biggest exit from Indian markets since 2017.

(Also read: Are you a Ford car owner? Here is what you should do now)

FADA said that the Parliamentary Committee on Industry had recommended the Ministry of Heavy Industries that the Centre should enact the Franchise Protection Act for dealers in the country so that it is a win-win for both OEMs as well as the network of dealers, as well as beneficial to customers in the long run.

Earlier, FADA had expressed its shock at Ford Motor's decision on Thursday. Vinkesh Gulati, President of FADA, said, "The dealers also carry demo vehicles which run into the 100's in numbers. Moreover, the company also appointed multiple dealers until five months back. Such dealers will be at the biggest financial loss in their entire life!"

"While Ford India employs 4,000 people, dealerships employ around 40,000 people without displacing them from their home locations thus being continuously skilled and up-skilled all this while. Ford India Dealers currently hold about a 1,000 vehicles which amount to about ₹150 Cr via inventory funding from reputed Indian banks. They also carry Demo Vehicles which are 100s in number. Moreover, Ford India also appointed multiple dealers until 5 months back. Such Dealers will be at the biggest financial loss in their entire life," he added.

(Also read - Escort to Freestyle: Ford's India journey so far at a glance)

Gulati also said that Anurag Mehrotra, Ford India President and MD, had called him personally post the carmaker's decision to assure that its dealers will be adequately compensated. There are nearly 170 dealers serving Ford Motor with 391 outlets across the country which have been set up at an investment of ₹2,000 crore.