Home Auto News After Pepsico, This Company Intends To Add 10 Tesla Semi Trucks To Its Fleet

After PepsiCo, this company intends to add 10 Tesla Semi trucks to its fleet

Tesla Semi electric truck claims to be capable of running 805 kilometres on a single charge and will be able to tow 80,000 lbs.Specialty distributor Karat Packaging is likely to deploy the electric Tesla Semi trucks in California where it provides third-party logistics services.
By : HT Auto Desk
| Updated on: 26 Dec 2021, 14:55 PM 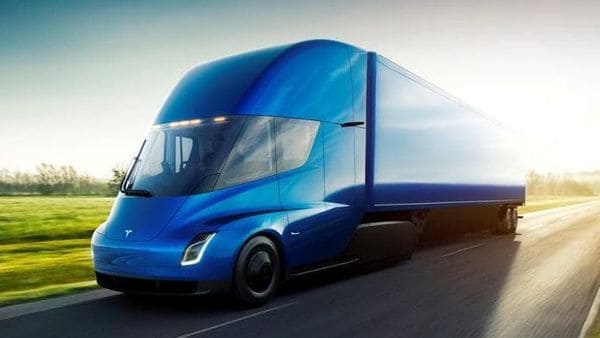 The Tesla Semi is seen in a handout image released by the company on November 16, 2017.

After PepsiCo, a specialty distributor and manufacturer of environmentally friendly, disposable foodservice products and related items - Karat Packaging might induct Tesla Semi pickup trucks to its fleet. The company might expand its fleet of 86 trucks and trailers with 10 Tesla Semis, Motor 1 reported.

Karat Packaging is involved in providing third-party logistic services in California and this is likely where it will deploy the electric Tesla Semi pickup trucks. The electric vehicle claims to be capable of running 805 kilometres on a single charge and will be able to tow 80,000 lbs.

Last month, beverage company PepsiCo's CEO Ramon Laguarta confirmed that it expects to take delivery of the first set of Tesla Semis by the fourth quarter, almost four years after placing its initial order for the electric trucks. The latter has placed an order for 100 of Tesla's electric trucks so as to reduce fuel cost bills and eliminate carbon emissions from its fleet.

Apart from Karat Packaging and PepsiCo, other companies that have placed an order for Tesla Semis include Walmart, fleet operator JB Hunt Transport Services and food distributor Sysco Corp. Tesla Semi is claimed to offer an efficiency of more than 0.80 km per kWh, through its aerodynamics and powerful electric powertrain.

Earlier this month, an Insideevs report claimed that the long-awaited Tesla Semi pickup has entered limited production at the EV giant's Giga Nevada site. The report cited an unofficial post by a Tesla enthusiast who spotted the Semi performing some basic tests at the factory backyard, sans a trailer. These tests included acceleration, braking and turning around in circles.

While the mass-production of the Semi has been pushed to 2023, it isn't surprising that the EV maker is looking at producing limited units of the vehicle given the placement of orders from various logistics companies.