Both Ford Mustang Mach-E GT and Performance Edition produce 480 horsepower using their pair of electric motors.The performance-spec version of Mustang Mach-E will be a direct rival to Audi e-tron and the Jaguar I-Pace.
By : HT Auto Desk
| Updated on: 24 Jun 2021, 04:48 PM Both the GT and Performance Edition Mach-Es produce 480 horsepower using their pair of electric motors and use an 88 kilowatt-hour usable battery pack. While the GT produces 814 Nm of torque, the Performance dishes out 860 Nm. With this setup, the GT can reach 0-60 mph in just 3.7 seconds while the GT Performance cuts the time to 3.5 seconds. Ford says that more than half of the orders for the Mustang Mach-E GT have been for the Performance Edition. 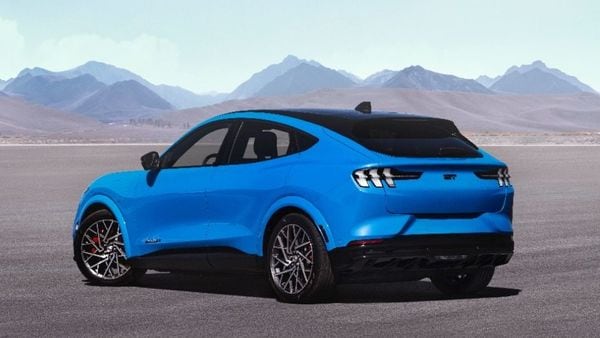 The new Mach-E GT has a considerable performance advantage over the standard Mustang Mach-E SUV thanks to the updated powertrain which includes an electric motor on each axle. The GT is differentiated from the regular Mach-E courtesy new 20-inch alloy wheels, red brake callipers and the new Cyber Orange, Grabber Blue paint options.

The Performance Edition also rides on 20-inch wheels with an Ebony Black finish while Pirelli summer tyres are wrapped around them with Red Brembo brake calipers.

The performance-spec version of Ford Mustang Mach-E will be a direct rival to the other premium electric SUVs including the Audi e-tron and the Jaguar I-Pace, both headed towards the Indian market.

As far as its India launch of the Mach-E GT goes, Ford hasn't hinted if the GT will be made available here anytime soon, but the company will bring the standard Mustang Mach-E in the country.