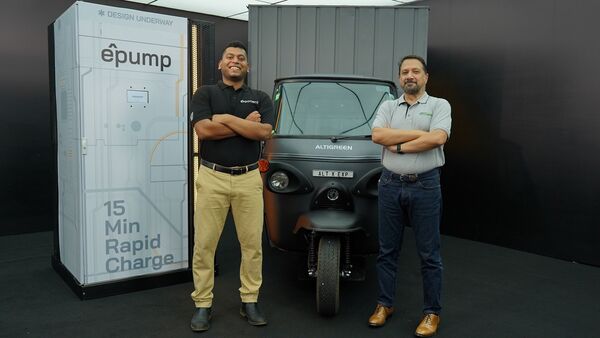 The electric auto comes based on Altigreen neEV.

Exponent Energy has unveiled its electric auto that claims to be the fastest charging three-wheeler in the world with a 0-100 per cent reenergizing time of just 15 minutes. However, there is a catch. The company claims that this 15 minutes charging is possible at the manufacturer's own e-pump charging network. Based on the Altigreen neEV, this electric vehicle comes with an 8.19 kWh battery pack, which is claimed to be indigenously built by the Exponent using regular LPF cell chemistry.

(Also Read: Expensive Ferrari supercars set to be even more expensive. Blame it on inflation)

The manufacturer also claims that the said e-pumps send 600A of electricity to the battery to refill the energy level to 100 per cent from zero in 15 minutes. This is claimed as 15 times faster than the industry standard. The electric auto is capable of running up to 85 km range on a single charge. Customer deliveries for the electric three-wheeler will commence in October this year. Exponent Energy also claimed that in order to offer the Ev owners a robust infrastructure, it would set up 100 e-pumps in Bengaluru in FY23, with other cities to follow.

Speaking about the electric auto, the manufacturer said that it could withstand 50-degree temperature without any trouble thanks to the LFP battery cell technology. It also ensures better safety and longer battery life, along with consistent performance.

Besides unveiling the electric auto, Exponent Energy also announced its partnership with Altigreen Propulsion Labs, an electric commercial vehicle manufacturer. Elaborating on the partnership, Arun Vinayak, Co-founder and CEO of Exponent Energy said that for all of India to go electric, EVs need to charge faster and last longer. “Our e-pack & e-pump make this possible with 15-minute rapid charging and 3000 cycle life warranty (a new industry standard). By being cell agnostic, we can leverage the existing manufacturing ecosystem that produces LFP and NMC cells extensively, and scale much faster," he further said.