Ola S1 Pro has some very impressive ride credentials and a solid feature list but software glitches, fire incidents and suspicions about build quality are being reported by many owners.
By : HT Auto Desk
| Updated on: 27 May 2022, 05:48 PM 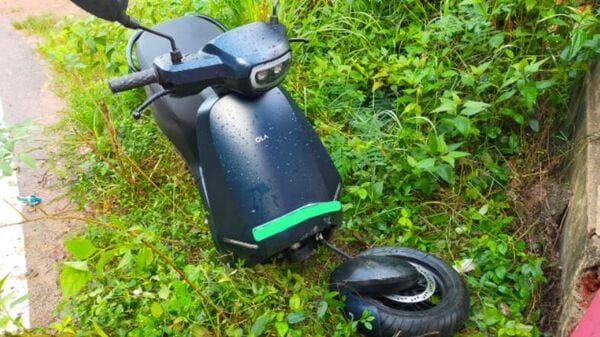 Ola S1 Pro has been a much-talked about electric scooter in the Indian market and while its credentials are indeed impressive on several counts, the debut product from Ola Electric has also had its fair share of problems. While most of the issues owners have been reporting are to do with the software part of the electric scooter, a user recently took to Twitter to post an image showing the completely broken front fork of his own model.

Sreenadh Menon took to Twitter to share the image of his Ola S1 Pro with its front fork entirely undone. The fork is what is responsible for connecting the wheel to the handlebar of a two-wheeler and any damage to this, especially when riding, can be extremely dangerous for the person or persons on the two-wheeler. Menon, in his post, claimed that he wasn't speeding. “The front fork is breaking even in small speed driving and it is a serious and dangerous thing we are facing now, we would like to request that we need a replacement or design change on that part and save our life from a road accident due to poor material usd (sic)," he wrote.

Menon's post once again opened a barrage of comments with many complaining either of shoddy materials used on their respective Ola S1 Pro units or a lackluster response to their complaints, or both. There were also, however, a few who highlighted that they have already clocked thousands of kilometers on the electric scooter and have faced no issues.

The Ola S1 Pro has been getting a whole lot of attention ever since bookings for it were first opened late 2021. The electric scooter is part of Ola Electric's massive ambitions to accelerate the shift to electric mobility in India. The Ola Futurefactory in Tamil Nadu is claimed to be one of the biggest for EVs and will eventually have an annual output capacity of 10 million units. Even the S1 Pro has some very serious performance credentials.

With a 3.97 kWh lithium-ion battery at its core, the S1 Pro has smart looks, is offered in multiple colour options, gets three ride modes and has a real-world range of around 135 kms although some users claim to have been riding it for even longer per charge. The product is also loaded with features and boasts of a seven-inch touchscreen, large cargo space under the seat, speakers, charging point for phones, Bluetooth connection, reverse mode, cruise control and more.

But while all of these have made the S1 Pro a product that has had people at large talking, problems like software glitches, fire-related incidents, complaints of delay in meeting delivery deadlines as well as service requests have deterred many potential buyers. Ola follows a direct-to-home sales model which means it has no dealerships or service centers anywhere in the country. It is a new and brave model to adopt but one that is, at least in present times, presenting challenges galore.

Update: Ola Electric has issued a statement regarding this incident. The following is what the company has stated.

Vehicle safety & quality standards are of paramount importance at Ola. Ola today has more than 50,000 scooters on the road. So far, our scooters have travelled over ~45 million cumulative km on Indian roads. The recently reported incidents of front fork breakage are due to isolated high impact accidents. All our scooters undergo rigorous quality and performance assessment across different terrains and riding conditions in India.