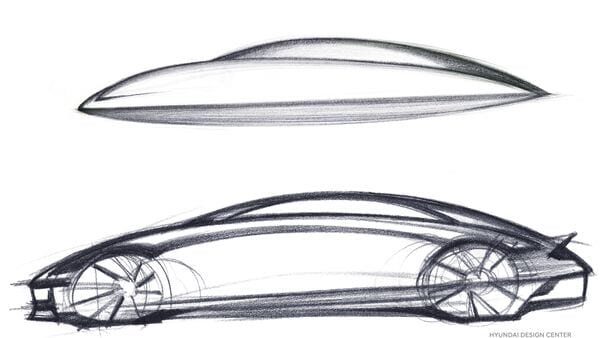 Hyundai is all set to unveil the design of its much-hyped Ioniq 6 electric sedan on June 29. The Tesla Model 3 rival has been already teased multiple times by the South Korean automaker, revealing bits of its design elements. However, now the car brand promised to unveil the whole design on 29th June. The Hyundai Ioniq 6 is based on the Prophecy concept that was showcased in March 2020. Expect the all-new EV too will come with several design elements from the Prophecy concept.

The latest image has revealed a good chunk of its front profile showing the pixelated LED daytime running lights, a smooth front bumper enhancing aerodynamic efficiency helping the car to achieve greater range. Also, the Ioniq 6 gets a coupe-esque roofline and a wide third brake light in pixelated form.

The Ioniq 6 is expected to ditch conventional wing mirrors and adopt side cameras. If the upcoming electric sedan adopts sleek cameras instead of traditional mirrors, it would improve the aerodynamics of the car. Also, it is likely to come with improved door handles which would remain flush with the body when not in use. These are some of the features already seen on the Hyundai Ioniq 5 electric crossover.

Inside the cabin, the EV will appear sleek and stylish with a premium vibe on offer. There would be sleek bezels on the digital instrument cluster and touchscreen infotainment system. For the powertrain, the Hyundai Ioniq 6 will come with a larger than 77.4 kWh battery pack. There would be dual electric motors, AWD etc.

Series production of the EV at the Asan Plant in South Korea is likely to start in July, with the first deliveries to customers expected to take place by end of 2022.