FAME-II portal down since March 21, claims may get delayed: Details here 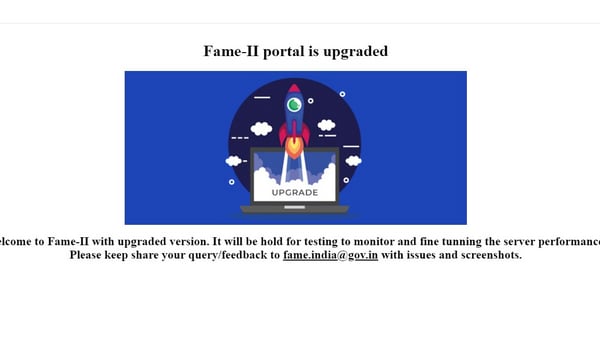 The website of the Indian government's flagship program for electric vehicles ‘Faster Adoption and Manufacturing of Hybrid and Electric Vehicles' or FAME-II has been down because of maintenance since 21st march 2022. Visiting the portal shows a message saying that the website has been upgraded now, but it will be held back for testing and for monitoring and to fine-tune the server performance. “Please keep/share your query/feedback to fame.india@gov.in with issues and screenshots," says a message on the website.

This could create a delay in claims for the EV ecosystem stakeholders, as the website plays a crucial role in claiming subsidies, selling and purchasing electric vehicles. While the ministry of heavy industries, which is the nodal ministry for the FAME-II scheme, informed the auto manufacturers about the lag in the website through an email but it didn't specify when the issue will be resolved.

The lag in the FAME-II website means the auto manufacturers are unable to sell their electric vehicles, as the portal is the first step for them to verify the buyer's Aadhar card on FAME-II for a subsidy, alongside insurance and RTO related procedures. With this, the automobile dealers who sell electric and hybrid vehicles have their working capital locked in FAME-II because of delays in claim settlement.

FAME-II was introduced as the second edition of the scheme to promote greener mobility in India. For the high-speed electric vehicles that require registration, insurance and are eligible for subsidies, the FAME-II website is highly crucial. The scheme has played a key role in promoting electric vehicles in India. Under the Union Budget 2022-2023, an amount of ₹2,908 crore has been earmarked for subsidy under the FAME-II scheme.