Several incidents of fire in electric two-wheelers in recent past had raised questions over safety of EVs in India. The Centre had warned of strict action against those found accountable for the EV fire incidents.
By : HT Auto Desk
| Updated on: 22 Jul 2022, 09:30 AM 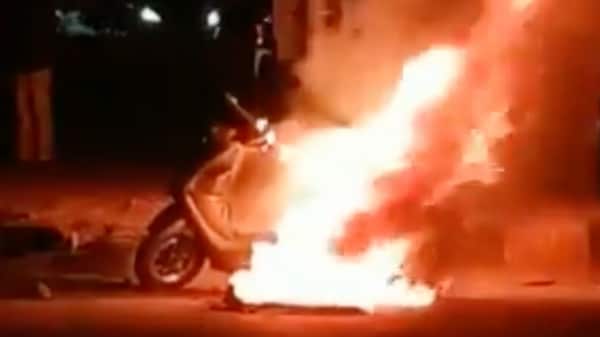 A Pure EV electric scooter engulfed in flame in Hyderabad on May 11. (File photo)

The Centre has served show-cause notice to all electric vehicle manufacturers in India whose vehicles caught fire in recent times. Union Minister Nitin Gadkari informed the Lok Sabha on Thursday that a notice has been sent to all concerned EV makers to reply to the notice or face action. The notices, served by Ministry of Road Transport and Highways (MoRTH) to the concerned CEOs and MDs, were served after a panel submitted its report on the recent EV fire incidents in India which also claimed several lives.

The notice will seek answers from EV makers why they should not be penalised for the EV fire incidents caused due to manufacturing defect of batteries. Failing to give a satisfactory reply, the Centre will take action against the EV makers found accountable. The panel which probed the fire incidents also suggested safety standards for EVs and the batteries.

Gadkari said that EV makers could face penalty as prescribed in Motor Vehicles Act. He said, “The ministry has issued a show-cause notice to the CEOs and MDs of the concerned two wheeler electric scooter manufacturers, to explain the reasons as to why the relevant Sections of the Motor Vehicles Act should not be invoked against them. Further processing will be done on receipt of their replies."

It all started with a video of an Ola Electric S1 Pro scooter catching fire in Pune earlier this year. Later, more incidents were reported from various parts of the country. At least six people have been killed in such incidents. Several EV makers were forced to recall their products amid criticism over safety issues. Following the EV fire incidents, Okinawa had recalled 3,215 units of vehicles, Pure EV had recalled 2,000 units and Ola Electric had recalled 1,441 units in April.

Last month, the Bureau of Indian Standards (BIS) had issued performance standards for EV batteries. The standards set by BIS is based on several real world scenarios which also include operating battery at low and high temperature. Besides the new guidelines, the BIS is also expected to come out with two more standards related to batteries for various passenger and goods carrying vehicles in coming days.

India currently is home to more than 13 lakh electric vehicles. Uttar Pradesh, Delhi and Maharashtra are the top three states with most number of EVs on road.