Watch: After a wooden Bugatti, dad builds a wooden tank for son 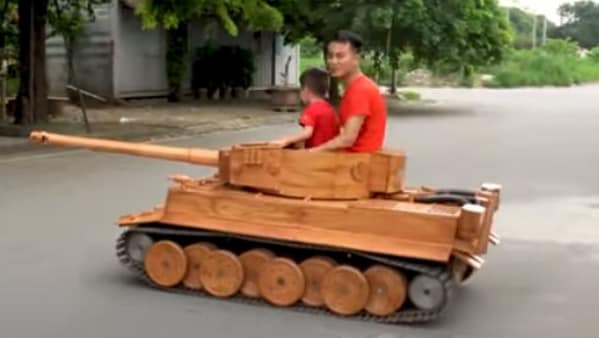 The wooden battle tank is a functional one. (Image: Youtube/ND - Woodworking Art)

(Also Read: Wooden Tesla Cybertruck is here while wait for the real one still continues)

The person who happens to be a YouTuber started the project by building the frame of the tank and the wooden sprockets. He used actual metal sprockets to connect the tracks, while the wooden ones are just for aesthetics. The two tracks can move in both front and rear directions thanks to the two electric motors. These moving tracks allow the tank to perform real tank turns easily. The wooden tank even comes with a rotating cylinder at the centre. It gets a bazooka nozzle to complete the realistic visual appearance.

However, the real tough job begins with the body panels and detailings, which have been made out of wood only. As the video suggests, the whole project took three months to complete. Besides the wooden panels, the tank also comes with metal frames and welded metal panels. With the detailing of the tank project, the three months seem justified.