Volkswagen Tiguan facelift will be launched by the middle of the year.It will take on the likes of Hyundai Tucson and Jeep Compass SUVs.
By : Sabyasachi Dasgupta
| Updated on: 31 Mar 2021, 11:40 AM 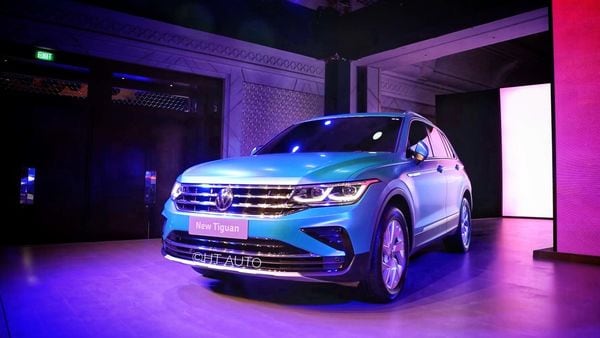 Volkswagen has unveiled the facelift version of the Tiguan SUV.

Volkswagen has unveiled the fourth SUV in its lineup for India by taking the covers off the facelift version of Tiguan 5-seater SUV. Launched first in 2017, the Tiguan SUV has undergone several changes and will be launched much ahead of the Taigun SUV.

Although the interiors of the Tiguan SUV are still kept under wraps, the change in styling is quite prominent. The grille now wears the new VW logo, and is in line with the latest design from the Volkswagen stable. It gets four chrome lines running across the length of the grille, which makes it look bolder and premium. The grille is flanked by LED headlights that will come with different modes of lighting.

On the sides, the Tiguan facelift SUV gets LED turn indicators, new chrome lines running across the body. The SUV stands on 18-inch Frankfurt alloy wheels. At the rear, the dark red tail lights will now come with new LED signature. It also gets feather-touch boot opener.

Volkswagen said the interior of the new Tiguan SUV will have a digital cockpit, much like the Taigun and T-Roc SUVs. Besides these, Tiguan will also get premium Vienna leather seats, illuminated scuff plates, Panoramic sunroof, 30 shades of ambient lights and much more.

Built on MQB platform and powered by TSI technology, the new generation Tiguan SUV will now be powered by a 2.0-litre TSI engine, instead of a diesel mill as used earlier. The new engine can churn out peak power of 190PS and 320 Nm of peak torque. The engine will be mated to a 4MOTION, 7-speed DSG transmission with paddle shifts.

The price of the Tiguan facelift SUV is expected to be around ₹28 lakh, and will take on some of the other premium SUVs like Hyundai Tucson and Jeep Compass when launched.