Volkswagen Taigun is based on the MQB A0 IN platform and is crafted carefully to cater to the Indian customers. While not flashiest in the mid-size SUV segment, Taigun balances core Volkswagen strengths with new-age visual and feature highlights.
By : Shubhodeep Chakravarty
| Updated on: 09 Aug 2021, 17:24 PM 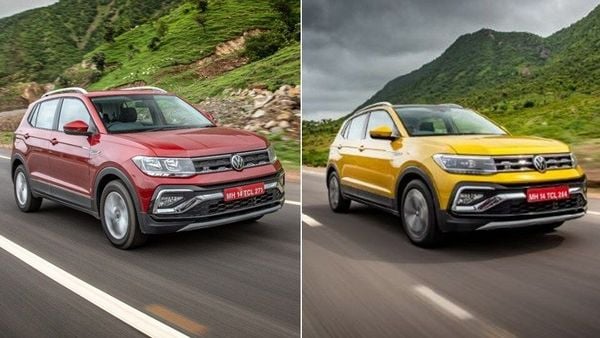 Volkswagen Taigun will be offered with two petrol engine options and with three transmission choices.

Volkswagen Taigun is the biggest single-car offensive from the German car maker ever in the Indian automotive market. Period. There may be many who point towards some of the sedans from Volkswagen that have found favour from buyers here but there is just no denying that while the competition is absolutely fierce, the scope and scale in the mid-size SUV space is also quite phenomenal. It is with the hopes of creating an in-road in this lucrative segment that Volkswagen Taigun will seek to woo and wow prospective buyers.

So is the Volkswagen Taigun good enough to a) establish itself as a solid new product, and b) mount a serious challenge to the likes of Hyundai Creta, Kia Seltos and Tata Harrier, among others? We took the upcoming car around the scenic, rain-drenched hills of Udaipur to find out. 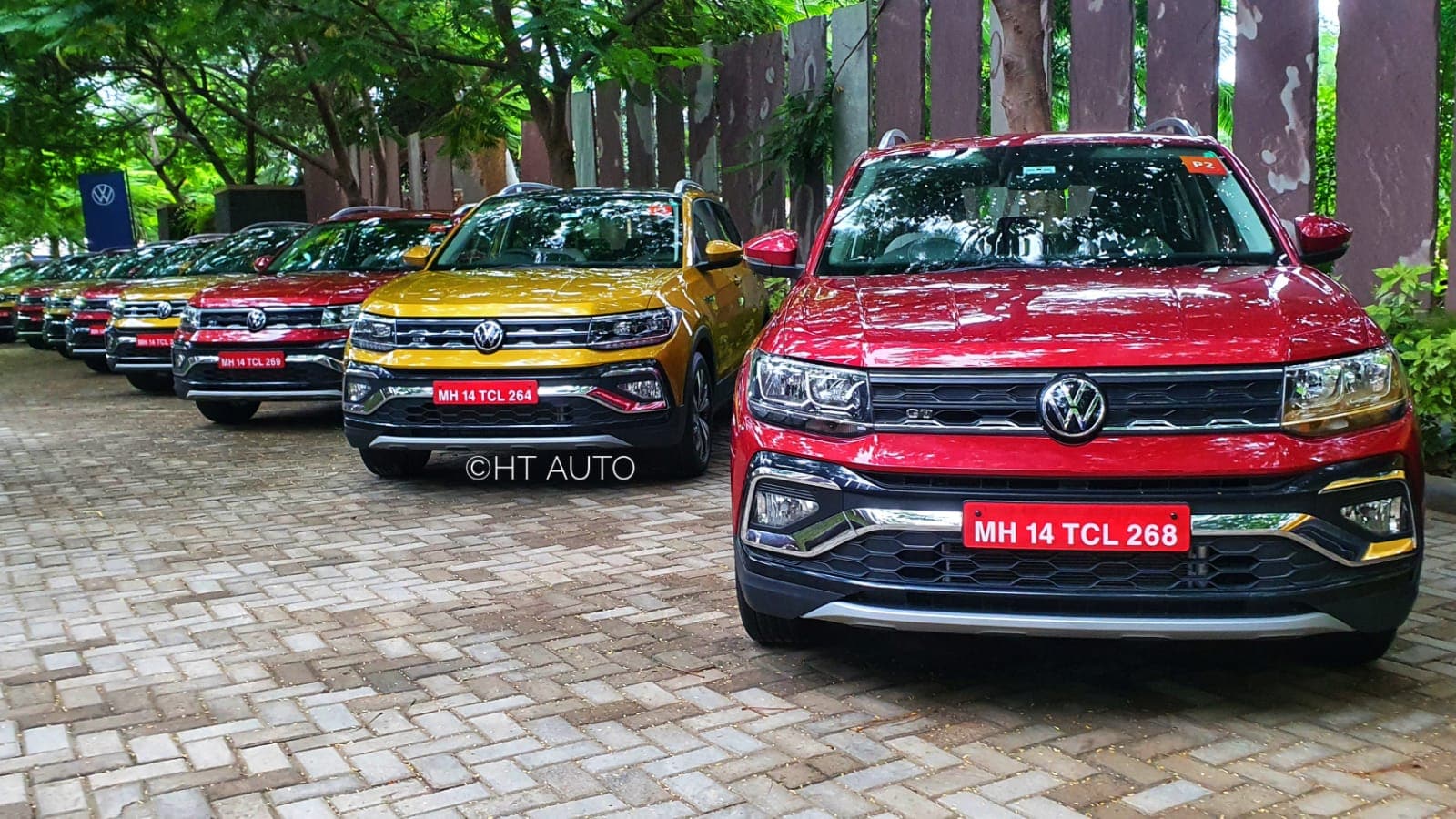 There are five exterior colour options on offer on the Volkswagen Taigun. (HT Auto/Sabyasachi Dasgupta)

It is quite easy to often get carried away when designing an all-new SUV, especially for a looks-conscious car market such as ours. But I would have been very, very surprised had the Taigun been like no other Volkswagen we have ever seen.

Quite pleased to report that here is an SUV that - in how it appears from the outside - beautifully balances Volkswagen's trademark design strengths with modern-day interpretations for a smart profile all around. 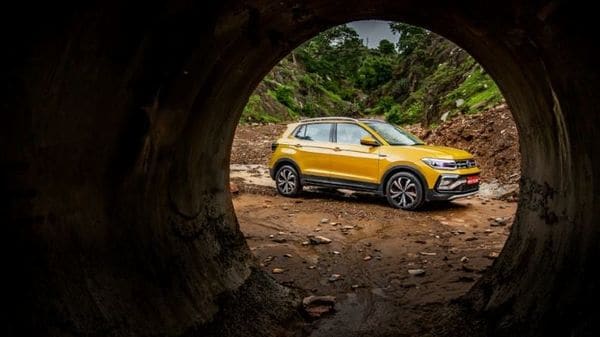 Volkswagen Taigun has a smaller footprint than some of its rivals but benefits from a very European design philosophy.

Remove the VW logo from the front grille and the Taigun is still clearly a VW. But the generous dollops of chrome on the front - on the grille and the front bumper - clearly underline an intent to put on some visual pomp. There are multiple body lines on the bonnet and a silver skid plate at the bottom.

Very important to note here is that there are subtle and not-so-subtle differences between the model with DSG transmission and the MT like the former gets LED headlights with LED DRLs, 17-inch dual-tone alloy wheels, more prominent chrome dashes on the grille, among others.

The MT Taigun makes do with halogen headlights with LED DRLs and smaller 16-inch alloy wheels. 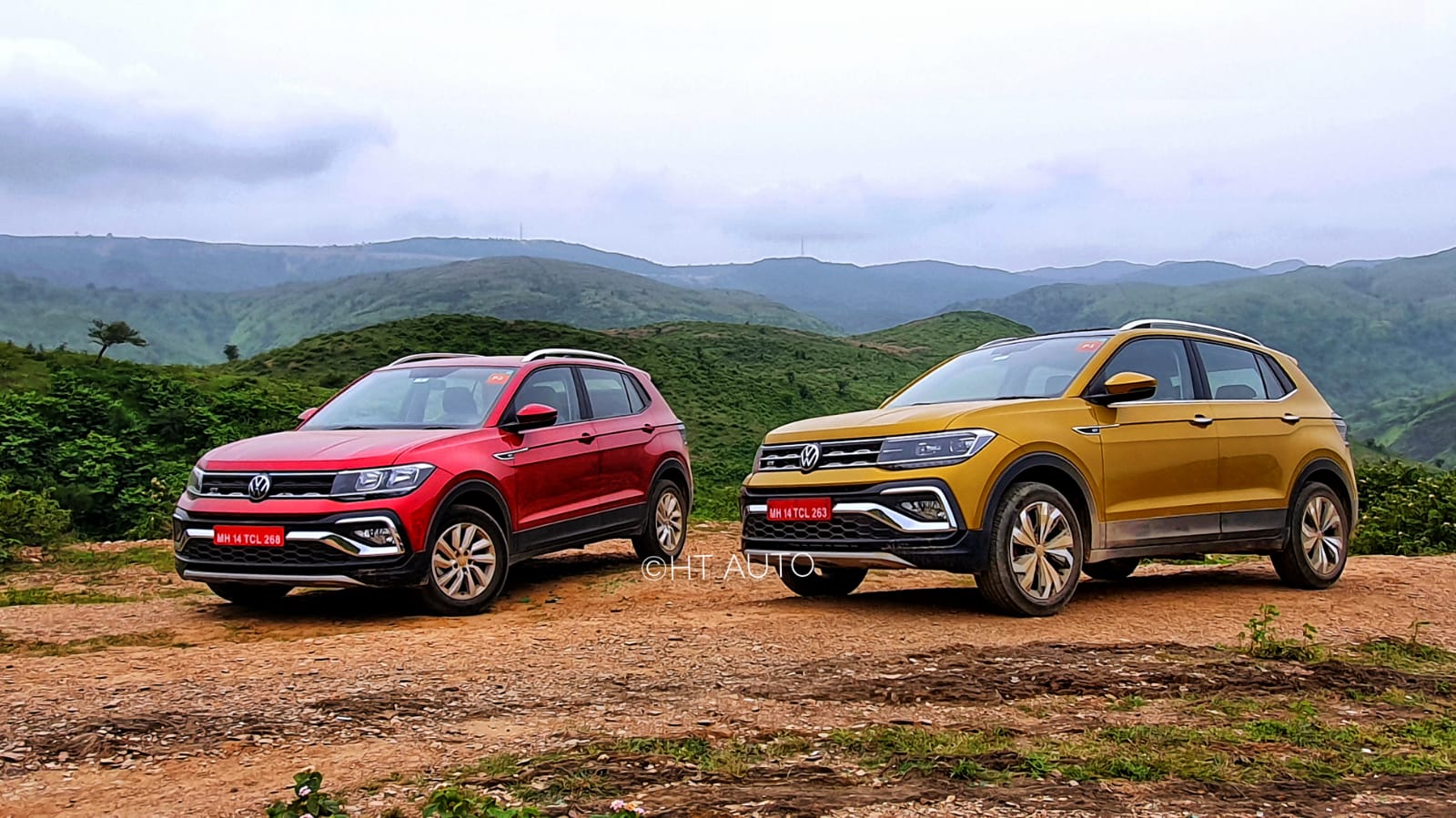 That said, the roof-rails on both are functional and the side profile also gets chrome additions on the window line and dashes of chrome strips on the door handle. There's nothing dramatic on the side and the SUV looks very chique and European from here.

It is by the time that designers come to the rear that many often run out of steam but the good folks at VW saved their best for the last. The rear profile of the Taigun is its most radical and, thankfully for VW, most appealing as well. The LED tail lights are connected by what the company calls 'Infinity LED lights' - a prominent illumination strip - that gives it a very contemporary style. I would have given it full marks had it also featured brake-light illumination but this line-strip light won't come alive at the push of the pedal, instead illuminating at the turn of the headlight knob. 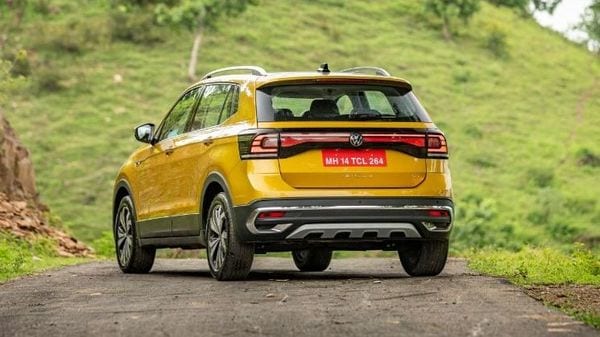 As for the colour options to be made available, Volkswagen Taigun will come in five hues - Yellow and Red (seen here on our test drive models, and Grey, Silver and White.

As far as the interiors of this SUV are concerned, there isn't anything that stands out in spectacular fashion. But because here is a Volkswagen product, many of the highlights are a major departure from the models we are accustomed to seeing from this particular German brand.

For instance, the Taigun gets red-colour ambient lights on the dashboard and front doors. It has support for wireless Android Auto and Apple CarPlay connections. And yes, it does get a conventional-sized sunroof too. 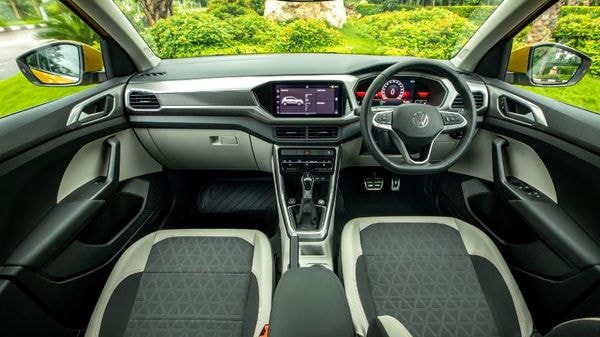 Taigun cabin has a clean and uncluttered dashboard layout.

The 10-inch main infotainment unit is positioned well to offer a comfortable view to all in the vehicle and is quite responsive to touch. It can be used for navigation, music source selection, to check vehicle statistics as well as to access apps - there are currently four but more are likely to follow.

There is also an eight-inch driver display which is all-digital in the top model and semi-digital in the MT. The addition of 'virtual cockpit' ensures that the display can be customized as per individual preference, something that is missing in the Skoda Kushaq. The AC control buttons and the tiny display screen, however, are identical.

What I absolutely abhorred is the jarring red border on the dashboard, flowing all the way on to the center console. While an extension of the exterior colour, the cherry in 'Cherry Red' has been taken way too far and - frankly speaking - looks distasteful. No such complaint on the DSG test model which, thankfully, did not have its yellow body hue extending inside and instead gets a much simpler shade of silver, bordering on off-white. An otherwise clean and sleek dashboard profile which the Taigun has does equally deserve a clean colour scheme. The red colour highlights on the inside of this Taigun may be a bit too tacky for certain personal tastes. (HT Auto/Sabyasachi Dasgupta)

Beyond this, the Taigun checks the boxes right with a relatively high driving position with manual adjustment, plenty of storage space on the doors and in the glovebox, cup holders next to the parking brake and a steering wheel which can be adjusted for reach and rake.

Move over to the rear seats and the quality of cushioning remains quite good. There is massive amounts of knee room, thanks to the best-in-segment wheelbase, and the under-thigh support and head room are also adequate. There is a roll down central armrest with cupholders in case there are just two passengers at the back. 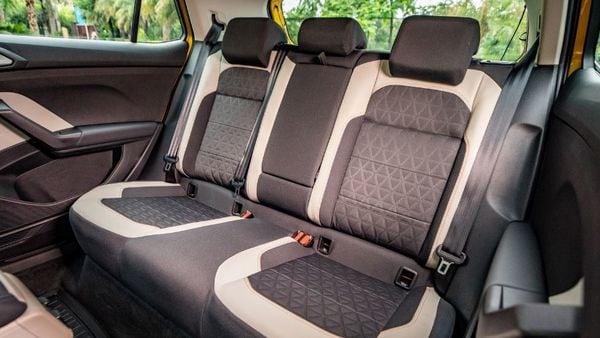 A look at the rear seats inside the Taigun SUV.

Three occupants too may be quite comfortable even if I have my doubts about the shoulder room in this case. The fact that the central armrest doesn't jut back much means that there is space for the middle passenger to rest his or her feet. But passengers on either side have restricted space for their feet because both front seats sit on platforms which significantly eat into the area available.

This is the biggest drawback - apart from the rather small rear windows - that I found on the Taigun's rear seats which otherwise ought to be great for both city rides as well as highway commutes. Speaking of highways, the rear seats do fold in 60:40 split to add to the boot space available.

If you are in the market for a diesel SUV, thanks for reading till here but this is where you can sign off. That is because there is no diesel Taigun coming. But if petrol motors are your preference, you can hardly go wrong with the 1.5-litre TSI engine on offer with the Taigun. 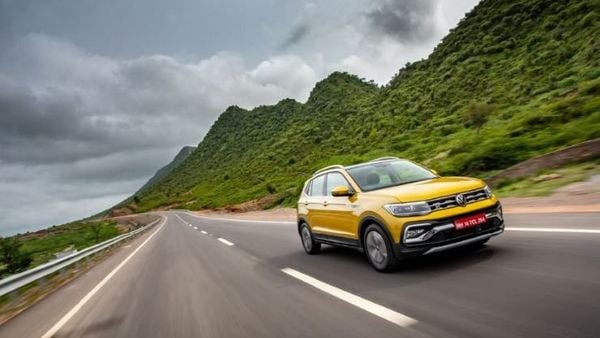 While there may not be a diesel engine, the TSI petrol engine inside the Taigun will satisfy eager as well as placid drivers.

While there is a smaller 1.0-litre engine that will come out in the very near future, it is the 1.5-litre motor - delivering 148 hp and with 250 Nm of torque - that is likely to be the mainstay of the Taigun lineup.

Taigun has a top speed of 190 kmph and Volkswagen claims that it can hit 100 kmph from zero in 9.1 seconds. But it is its inherent drive traits that I focused on instead of running behind numbers. 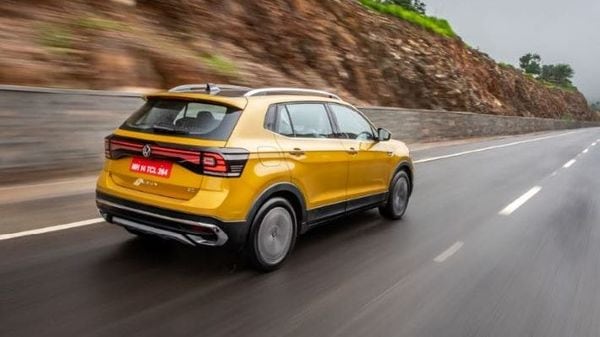 Volkswagen Taigun remains as steady as one would expect a Volkswagen car to be, even at relatively high speeds.

What will come as a reason to celebrate for Volkswagen fans is that the Taigun feels quite solid from the word go. With a meaty steering wheel which remains super steady even at high speeds, the Taigun has a typical VW aura around it. The seven-speed DSG box clicks along really well, whether ambling along or pushing the clock, even if there is a slight grunt noise from under the hood when pedal meets metal. Paddle shifters offer more control but I did not expect Taigun to be radically sporty to drive. And it isn't. And that's fine.

Keep this VW SUV rolling minus driving theatrics and it will offer a very, very reassuring experience. Even when winding the vehicle through long and yawning curves along the Mount Abu highway - and at near triple-digit speeds, the German engineering was amply evident. The slightly stiff suspension set up also helps the car gobble up most of the on-road challenges with calm ease.

This is true for the Taigun MT as well and while the throws may not be as short and crisp as what is on offer inside Korean rivals, it is precise and has a large range. Unless really gunning it on uphill stretches, the large gear range allows means less effort on your part. 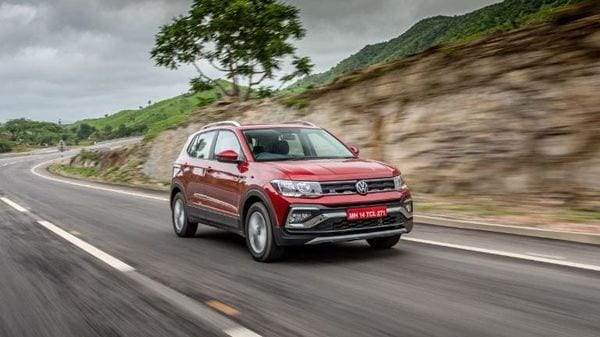 Taigun with the manual transmission benefits from a large shift range.

On the flipside though, sharp curves at even moderate speeds result in very noticeable body roll - a blemish which stands out especially because of the otherwise flawless drive traits of the Taigun.

Overall though, it is hard not to come out impressed with how the Taigun fares when on the move and this is where this SUV is likely to score best.

It is about time that Volkswagen brought all its expertise in automotive engineering in a new package which suits the Indian palate. Taigun, the company's first-ever product which is based on it MQB-AO-IN platform is an exercise in patience and careful study of how to match age-old traditions with the demands of an ever-changing automotive world. The balance is struck and the result is Volkswagen Taigun. 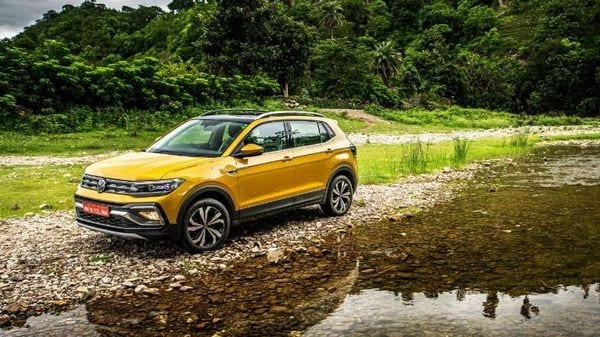 Taigun is a reflection of what Volkswagen can achieve if it chooses to move with the times and address market preferences.

The pricing is expected to be a tad bit higher than that of the recently-launched Skoda Kushaq ( ₹10.51 lakh to ₹17.62 lakh, ex showroom) but being a Volkswagen, it may well be justified.

Although unlikely to topple the likes of Creta from the perch, the Taigun could pose a commendable challenge while also possibly hurting the prospects of cousin Kushaq. Taigun will definitely appeal to Volkswagen aficionados and is more than likely to find favour among first-time VW buyers as well.