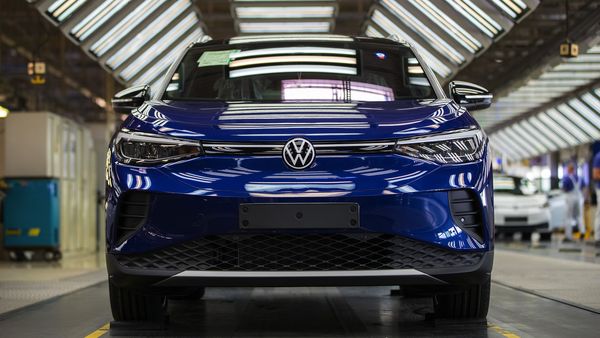 Volkswagen is fast emerging as a formidable challenger to the massive dominance enjoyed by Tesla in the world of electric vehicles. And while there may still quite a distance that remains to be covered, Volkswagen - the company and the brand - is not shy of pitting its electric vehicles against its own cars powered by internal combustion engine. Herbert Diess, Chairman of the Board of Management of Volkswagen Group, recently took to his LinkedIn profile to highlight the benefits of being behind the wheel of a Volkswagen EV.

Diess elaborated on how much more cost-effective electric vehicles are when compared to petrol or diesel powered models. For this, he referred to models from the Volkswagen brand and banked upon data from a German auto magazine called Autozeitung. “Driving a VW Taigun costs around 30% more per kilometre than an ID.4," he wrote, before also referring to models from other brands under Volkswagen brand. “One kilometre in an Audi Q5 costs around 40% more compared to a Q4 e-tron. And driving a Skoda Kodiaq is around 50% more expensive per kilometre compared to an Enyaq. It’s time to switch." 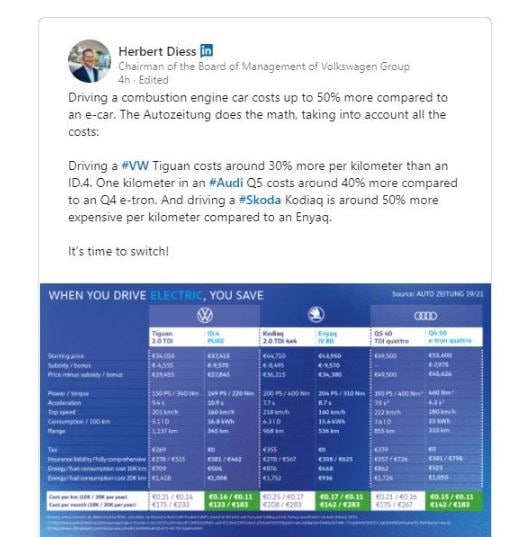 This message was posted by Herbert Diess on his LinkedIN account.

Volkswagen ID.4 is at the core of the company's thrust in the electric vehicle space. Based on the MEB platform, the electric vehicle is currently offered in markets such as China, United States and select European countries. It was also adjudged 2021 World Car of the Year.

Electric models like ID.4 and ID.3 have already started making a strong contribution to Volkswagen sales with the company expecting this to rise further with battery development that may further bolster per-charge range.