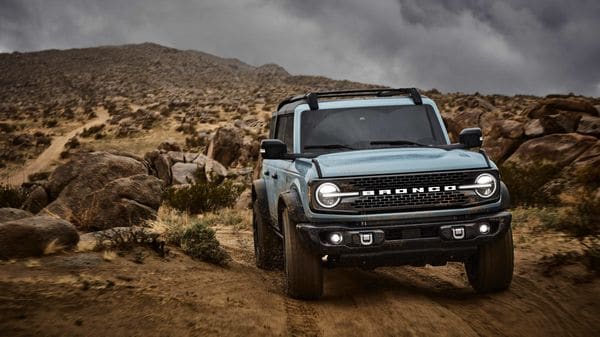 The SUV is powered by a 2.7-liter V6 EcoBoost engine under the hood, which is mated to a 10-speed automatic transmission. (Representational image)

The very first unit of all-new Ford Bronco SUV has been sold for $1,075,000 at the Barrett-Jackson Scottsdale auction in Arizona this weekend. The particular model is a sixth-generation Ford Bronco two-door model. As the auctioneers said, the entire amount fetched by the very first unit of the all-new Ford Bronco SUV will benefit the National Forest Foundation and Outward Bound, both of which are parts of Ford's new Bronco Wild Fund mission to connect people to the outdoors.

The two-door hardtop Ford Bronco VIN 001 in question is a fully-loaded First Edition model of the SUV. It gets exclusive Lightning Blue exterior paint. Inside the cabin, it boasts Navy Pier leather-trimmed seats. The SUV is powered by a 2.7-liter V6 EcoBoost engine under the hood, which is mated to a 10-speed automatic transmission.

The name of the winning bidder for the very first unit of the all-new Ford Bronco SUV wasn’t disclosed though.

Talking about the auction of the Ford Bronco VIN 001, Craig Jackson, chairman, and CEO of Barrett-Jackson has said that the auction has helped to raise millions of dollars through the sale of nine charity vehicles, which included a record number of VIN 001 and first production models ever offered at auction. “We’re grateful to our partners at Cadillac, Chevrolet, Dodge, Ford, and GMC chose to leverage the Barrett-Jackson stage and give collectors the opportunity to own a piece of history and also benefit critical organizations. I continue to be inspired by their commitment to supporting those who need our help the most," he further said.

Ford Bronco is one of the most iconic off-roaders around the world that have ruled the trails for a long time. Considering its popularity and the growing demand for SUVs, the American auto major decided to bring back the iconic badge in a completely new avatar.