Maruti Suzuki has announced that it will reveal its new compact SUV on July 20. The SUV will be largely based on the Urban Cruiser Hyryder SUV recently unveiled by Toyota Motor.
By : HT Auto Desk
| Updated on: 07 Jul 2022, 17:38 PM 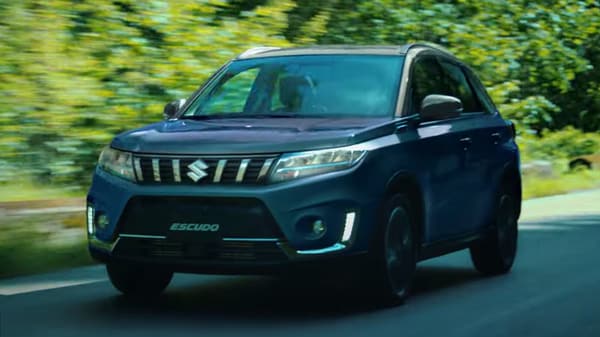 Image of the Suzuki Escudo Hybrid SUV, which has many similarities with the Toyota Urban Cruiser Hyryder SUV. Maruti's upcoming compact SUV is also expected to borrow features from these two models.

The countdown for the unveiling of Maruti Suzuki's new compact SUV, which is likely to be called Vitara, has started. The company will introduce the new SUV, to be largely based on Toyota’s Urban Cruiser Hyryder SUV, on July 20. The SUV is also likely to share several similarities with a Suzuki SUV recently launched in Japan called Escudo. The Suzuki SUV comes with a hybrid powertrain, something likely to be borrowed by Maruti Suzuki for the upcoming Vitara as well.

Maruti is likely to launch the new Vitara SUV closer to the festive season this year. Besides the Hyryder SUV, the Vitara SUV will take on rivals like Hyundai Creta and Kia Seltos in the compact SUV segment.

The Suzuki Escudo SUV, which is also sold in European markets, uses a naturally aspirated 1.5-litre DualJet four-cylinder petrol engine under the hood. The engine is capable of churning out a maximum output of 99 hp and 132 Nm of peak torque. This engine works alongside an electric motor rated at 33 hp and 60 Nm of torque. Maruti is likely to use similar powertrain. It is likely to use either a five-speed manual or the new 6-speed torque converter gearbox for the transmission job.

The Escudo SUV is offered with both front-wheel and all-wheel drive options in Japan. Expect Maruti to offer the Vitara SUV with only the front-wheel drive version for India. However, an all-wheel drive option cannot be ruled out at the moment. Maruti may also borrow different drive modes offered in the Escudo SUV. It comes wit performance modes including Auto, Sport, Snow, and Lock. This feature is also available in some of the other rivals in the segment in India.

Maruti is likely to load the Vitara SUV with a host of features. It is expected to come with a 9-inch touchscreen infotainment system that is also used in the new Brezza. It is also likely to get a Head-up Display, 360 degree camera, ventilated seats, connected car technology and a panoramic sunroof among other features.