Mahindra showcased some very promising products at the Auto Expo 2020 and some of these cars and SUVs will be officially launched in India soon. Here's the full list.
By : HT Auto Desk
| Updated on: 24 Apr 2020, 09:02 PM 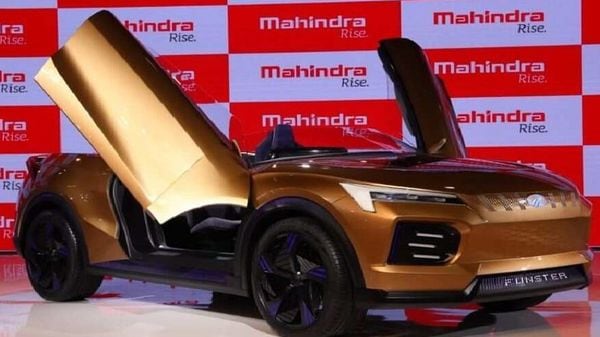 Mahindra's product offensive strategy includes a number of facelifts as well as all-new models. It showcased some very promising products at the Auto Expo 2020 and some of these vehciles will be officially launched in India soon. Here's the complete list of upcoming Mahindra cars and SUVs in India.

The company has already revealed the production-ready eKUV100 at the Auto Expo 2020. It's prices have also been disclosed. The all-electric KUV100 has been given a price tag of ₹8.25 lakh (ex-showroom Delhi, incl. FAME-II subsidy). It will be go on-sale in India by mid-2020. It will be the most affordable electric SUV in India.

It employs a 15.9 kWh Lithium-ion battery pack which is good enough to deliver a full-charge range of 147 kms. It's powered from a single electric motor which delivers 40 kW of power and 120 Nm of torque.

While the next-generation Thar was earlier rumored to make its official debut at the Auto Expo 2020, the company later revealed that its market launch is still half-a-year away. Soon after the eKUV100 goes on-sale, the next-gen Thar will also see a market launch, sometime around June-July this year.

For the uninitiated, the 2020 Thar is a completely new model which is based on a new platform. It will most likely use a newly developed 1.5-litre petrol and 2.0-litre diesel engines.

The Atom is another all-electric product in the company's line-up. It is a last-mile connectivity mini four-wheeler. The company claims that it posses agility of a three-wheeler and comfort/safety of a car. It will be launched in India in third-quarter of this year.

It comes packed with features such as air-condition, rear-seat entertainment system and 4G connectivity. It sources power from the MESMA 48V powerplant.

The XUV500 will enter into a new generation in 2021. The all-new model has also been spotted amidst road-tests on several occasions in the past. Interestingly, its exterior design will take hints from the Funster electric roadster concept which was revealed earlier this year at the Auto Expo.

It will be based on the all-new monocoque platform and will source power from new 2.0-litre turbocharged petrol/diesel powertrains. Expect it to go on-sale in India in early 2021.

Another momentous Mahindra product in the making is the all-new Scorpio which is expected to roll-out in first-half of 2021. It has also been spotted during road-tests. With the new-generation, Mahindra Scorpio will bring along a new evolutionary exterior design, new features and powertrains. It will employ the same ladder-frame chassis which will be seen in the upcoming next-gen Thar as well.