Toyota Innova to get a facelift soon? Spyshot triggers rumours

The Toyota Innova MPV spotted testing in camouflage on the roads of Thailand, is expected to come with a hybrid powertrain.
By : HT Auto Desk
| Updated on: 21 Feb 2022, 10:36 AM 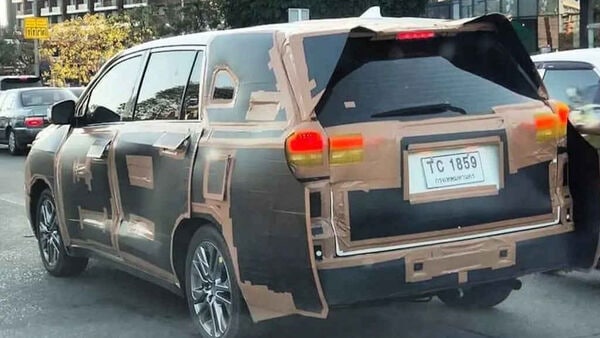 This camouflaged Toyota model, which resembles the seven-seater Innova MPV in India, was recently spotted testing under a camouflage. (Photo courtesy: Facebook/@Natthaphon Matsarat)

Toyota Innova, the three-row seven-seater MPV, is likely to get a facelift soon. A new model of the Innova has been recently spotted testing on the roads of Thailand, which has triggered speculation about an imminent upgrade over the current models sold in the markets.

Toyota had earlier said that it will produce Hybrid Electric Vehicles (HEVs) from this year in Thailand and export to other markets too. This Toyota hybrid model is also confirmed to be based on a model that already exists.

The spy image of the new Toyota model shows that the character lines of the model are similar to the existing Innova Crysta MPV. However, there is one significant change in the camouflaged model. There is a small window behind the C pillar which indicates this model can be used for five passengers.

Toyota Innova is based on the same body-on-frame chassis used for the Fortuner SUV. The new model of Innova that was spotted was completely covered in a thick cloth. However, it gets LED tail-lights, a roof mounted spoiler with stop lamps and new styling wheels.

The new Innova is expected to get changes in its looks, interior as well as technical aspects. The new Toyota Innova is likely to be offered in a front-wheel-drive option thanks to the TNGA platform.

The 2023 Toyota Innova is more likely to be offered in petrol and petrol-hybrid powertrain options. The company may discontinue its diesel engine. The reason for this is that Suzuki and Toyota have decided to promote petrol, hybrid, CNG and electric as fuel options in the market.

Toyota Innova Crysta models sold in India are offered with two engine options. There is a 2.4-litre turbo-diesel and a 2.7-litre naturally-aspirated petrol engines to choose from. The engines come mated to either a 5-speed manual and a 6-speed torque converter automatic gearbox.

Toyota had last updated the Innova Crysta model in India back in 2020. The Japanese carmaker had discontinued the 2.8-litre 1GD-FTV diesel engine and replaced it with the 2.4-litre turbo diesel unit due to BS 6 emission norms.