Toyota Hyryder will compete against the rivals like Kia Seltos, Skoda Kushaq, and Hyundai Creta.
By : HT Auto Desk
| Updated on: 01 Jul 2022, 08:38 AM 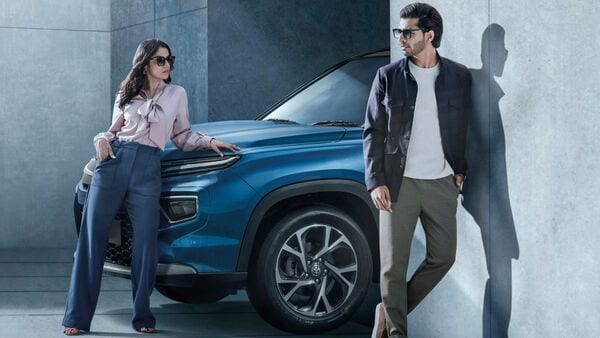 Toyota Hyryder mid-size SUV is all set to break cover today (July 1). The SUV will not only come with an eye-catchy design but the most interesting part of it is the powertrain. The SUV will be introduced as a full hybrid model, claimed the carmaker. The Hyryder name has been given to this SUV as it is a hybrid model. Toyota Hyryder will be built alongside a Maruti Suzuki version at the Bidadi plant in Karnataka.

Here are the top five facts about the new SUV.

Once launched, Toyota Hyryder will compete against the rivals such as Kia Seltos, Skoda Kushaq, and Hyundai Creta.

Third car under the Toyota-Suzuki partnership

The Toyota Hyryder comes as the next model under the partnership between Toyota and Suzuki, after the Glanza and Urban Cruiser, which are respective rebadged versions of the Maruti Suzuki Baleno and Maruti Suzuki Brezza.

Toyota has teased the car giving us a slight glimpse of the front profile. The front fascia gets a premium look with chrome garnishing. The Stripped LED daytime running lights to come sandwiched between the headlamps, while the piano black grille connects the headlamps. There is a large air dam that enhances the boldness of the SUV. The side profile and rear of the car are not revealed properly. But the Hybrid badge is shown ahead of the winged mirror that comes with integrated turn indicators. The rear gets C-shaped LED taillights connected by a chrome strip flaunting the brand logo at its centre. The video also reveals one of the paint themes of the car.

Toyota Hyryder is expected to come priced competitively against its rivals.