Toyota Hilux was launched in India earlier in 2022. Unlike Fortuner, Toyota has introduced the Hilux only with a single diesel engine option, while the transmission option includes both manual and automatic units.
By : HT Auto Desk
| Updated on: 10 May 2022, 01:58 PM 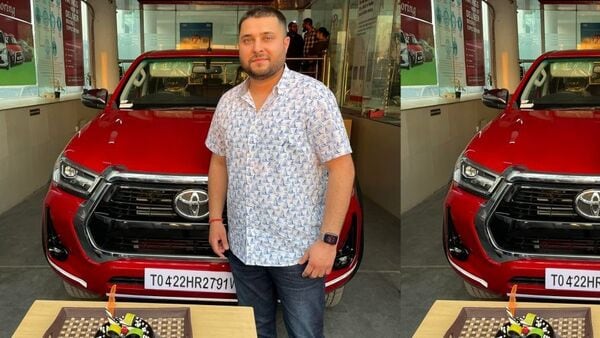 Targeted as a luxury pick-up truck, the Hilux has been priced at ₹33.99 lakh (ex-showroom).

After being launched in the Indian market earlier this year, Toyota initiated the customer deliveries of the Hilux pickup truck in the country. The Isuzu V-Cross rival was initially delivered to its first customer (Manav Maini) in India, who also took to the social media platforms to share the news. Targeted as a luxury pick-up truck, the Hilux has been priced at ₹33.99 lakh, ex-showroom, which places it on the higher side of the cost spectrum.

While the pickup truck has been introduced in India in five different colour options, the unit pictured (above) comes in an Emotional Red theme. The Hilux is also offered with several top-spec features such as an 8-way adjustable powered driver seat, a dual-zone climate control system, second-row AC vents, an 8.0-inch infotainment system, TFT multi-function display, UV cut glass, Electrochromatic mirrors, and much more. Moreover, it also gets leather seats and the top-end trim has been offered in India with automatic headlamps, integrated LED DRLs, LED tail lamps, 18-inch alloy wheels, power foldable ORVMs and more.

Unlike Toyota Fortuner, the company has introduced the Hilux only with a single diesel engine option, while the transmission option includes both manual and automatic units.

Under the hood sits the familiar 2.8-litre four-cylinder diesel engine pushing out 204 PS of power and 420 Nm of torque (manual) / 500 Nm of torque (automatic). It also gets a standard 4x4 drivability feature, unlike the Fortuner which gets the same as an option. Apart from that, it also comes with a high and low-range transfer case and A-TRAC traction control system, along with a downhill assist control feature. Its key rivals include the Isuzu V-Cross.