Home Auto Cars News Toyota Cruiser Vehicle For Holiday On Moon Before Home On Mars. Check It Out

Toyota cruiser vehicle for holiday on Moon before home on Mars. Check it out

Toyota Lunar Cruiser wants to not just put you on the Moon and Mars but ensure you have a comfortable and well-appointed stay.
By : HT Auto Desk
| Updated on: 28 Jan 2022, 10:49 AM 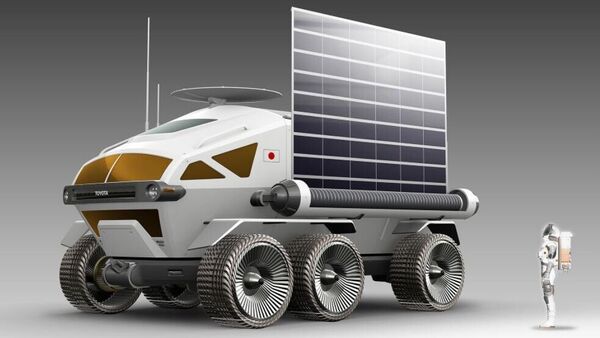 This image of the Toyota Lunar Cruiser was tweeted by @jaxa_wdc

Toyota has been working with Japan Aerospace Exploration Agency (JAXA) for some time now on a lunar vehicle that could help put people on the Moon by the end of this decade before going even further and all the way to Mars by 2040s. And while it has been known for some time now that work on such a vehicle has been in progress, more details have emerged about what is referred to as the Lunar Cruiser, a name that is taken from the iconic Toyota Land Cruiser SUV.

The basic driving principle of the Lunar Cruiser is a vehicle that would not only be able to transport people on the Moon and Mars but even provide a fully-equipped shelter. Associated Press quotes Takao Sato, Head of the Lunar Cruiser project at Toyota Motor Corp. as saying that the vehicle could indeed provide a habitable environment in outer space. “We see space as an area for our once-in-a-century transformation. By going to space, we may be able to develop telecommunications and other technology that will prove valuable to human life," he reportedly said.

But it is, by no means, an easy task. The lunar vehicle has to be capable of not just navigating on massively tough terrains and still provide a well-appointed and well-equipped shelter but also carry out certain tasks which may otherwise not be possible for occupants. As such, the Lunar Cruiser will be fitted with special robotic arms designed and developed specifically for it by Gitai Japan Inc. This robotic arm is equipped with a grapple function and can be extended for various mechanical tasks.

At present, details about the powertrain, exact cabin specifics and other specifications aren't known. But with Toyota vehicles having conquered most territories and terrains on Earth, the time may have now come to go out and beyond.