Toyota Aygo X is an urban sub-compact crossover with SUV styling and is powered by a 1.0-litre three-cylinder petrol engine.
By : HT Auto Desk
| Written By : Sabyasachi Dasgupta
| Updated on: 05 Nov 2021, 02:55 PM 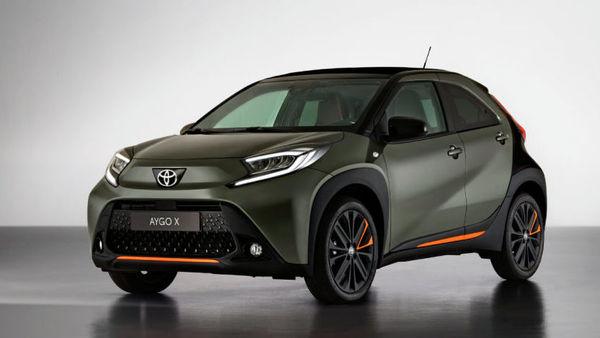 Toyota Aygo X is powered by a a 1.0-litre three-cylinder petrol engine.

Toyota has officially unveiled the new Aygo X, a sub-compact crossover with SUV styling elements that will remind one of the newly-launched Tata Punch. Toyota Aygo X is based on the GA-B platform, an architecture derived from the TNGA (Toyota New Global Architecture) platform on which the Toyota Yaris and the Toyota Yaris Cross are based.

The Toyota Aygo X comes with a two-tone exterior colour scheme that enhances its rugged appearance. The dual-tone scheme has been used in a different way than usually seen in other vehicles. The C-pillar of the Aygo X gets the black tone while the rest of the body gets other four available colours which include red, blue, cardamom green and beige.

Toyota Aygo X gets a large front grille, fog lamps, headlights along with LED daytime running lights. The indicators are two bars of light surrounded by a subtle bright light. The Aygo X also gets a profile in which the roof is wedge-shaped to provide a more sporty look to the car. It also sits on a set of 18-inch wheels which enhance the sporty character of the Aygo X.

The interior of the Aygo X comes with a multifunction steering wheel. There is a 9-inch digital driver display right behind it. The Toyota Aygo X has an infotainment system compatible with Android Auto and Apple CarPlay, wired as well as wireless, and the option to add the MyT application, which allows the driver to check vehicle-related information like driving analysis, fuel levels, warnings and more. The Aygo X also comes with a decently large boot space for its size at 231 litres.

The Toyota Aygo X is powered by a 1.0-litre three-cylinder petrol engine. It can generate a maximum output of 72 hp and peak torque up to 205 Nm. The engine is mated to a CVT gearbox.