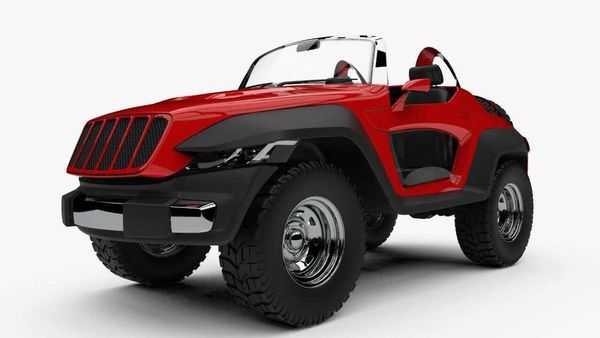 The images shared by DC2 Design on its social media page shows an open-roof Thar in a two-seater avatar. (Photo courtesy: Facebook/@dc2design)

Wait for the new generation Mahindra Thar SUV is almost over. This Independence Day, Mahindra will take the covers off the iconic off-roader which promises a lot of changes from the design aspect.

However, as we wait for the new Thar SUV, India's oldest custom design houses DC2 Design has come up with digitally rendered look of how the iconic off-roader would look like in future.

The images shared by DC2 Design on its social media page shows an open-roof Thar in a two-seater avatar. It has a sportscar-like flying rear buttresses behind the seats, and a separate casing for spare tyre which is integrated with the overall design philosophy of the SUV.

The grille of the rendered SUV is minimalistic with chrome accents on the bumper with black claddings. The headlights are also housed between these claddings, which run till the rear of the SUV connecting the taillights as well.

The wheels on this customised Thar SUV look really big making the SUV look more like an off-road dune buggies.

Though the design of this customised Thar may not appear too practical for the road, the design house is busy gauging interest from enthusiasts and its followers on social media.

The more ‘real-life’ Mahindra Thar though promises a whole lot of changes in its new generation avatar. According to Mahindra, the new Thar will not only attract the die-hard enthusiasts, but also appeal to all those who have always wanted to own an iconic vehicle with all the bells and whistles of a contemporary SUV.