Human waste to automotive fuel? It may be a stinky proposal but an Aussie company is using energy from human waste byproduct to run EVs on.Human waste from just one person can - after due processes at sewage plants of course, power this Kona for half a kilometre.
By : HT Auto Desk
| Updated on: 02 Jul 2021, 12:54 PM 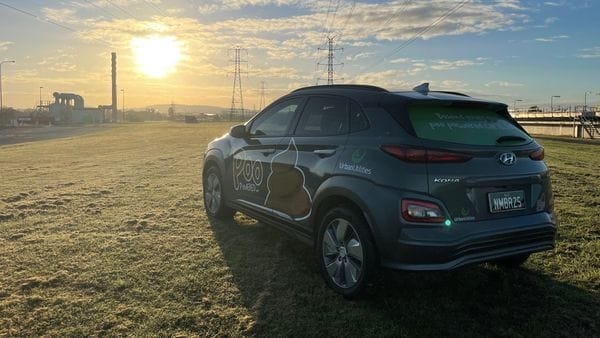 An electric car powered by human waste may not make for idea of a romantic getaway but it could be quite a radical prospect for sourcing energy from renewable sources. Urban Utilities in Australia has been developing poo-powered EVs for some time now and the latest is a Hyundai Kona Electric, christened as Number 2. It is the second such car to join the company's fleet.

According to the company, its electric cars use the power that is produced as a byproduct of biogas production from sewage treatment. The company developed its first poo-powered car in 2017.

Now, we know what you’re thinking… where does the poo go? How much poo does it take to fill up? Does it smell?

This Kona Electric uses 150,000 litres of sewage to charge its battery to full. With this, the SUV is capable of saving around $1,700 worth of petrol every year. The SUV can be charged using a 240-volt powerpoint and it has a 450 km range on a single charge.

Urban Utilities further elaborates that, on average, one person's daily habits can generate enough electricity to ensure this particular Hyundai Kona EV travels half a kilometer. Turning human waste into energy saves around $1.7 million a year in terms of operating costs, claims the company. It also says that the company produced enough electricity to power the equivalent of nearly 4,000 homes for an entire year in FY21.

Company spokesperson Anna Hartley says that more than 330,000 people in Brisbane’s southwest are helping to create fuel for the company's poo-powered cars every time they flush. “Number 2 is not your average SUV – it’s an S-Poo-V, with a giant poo emoji emblazoned on the side so there’s no guessing what’s powering it," she explains.

This particular Kona EV may look like any other from the outside but the body decal on the side profile reveals what's different. It gets a poo emoji and text saying 'poo powered.' The number plate too signifies the car's power source.