Battery fire is one of the great concerns for electric vehicle consumers for quite a long time.Hyundai Kona EV in India competes with rivals like Tata Nexon EV and MG ZS EV.
By : HT Auto Desk
| Updated on: 24 Jun 2021, 03:33 PM 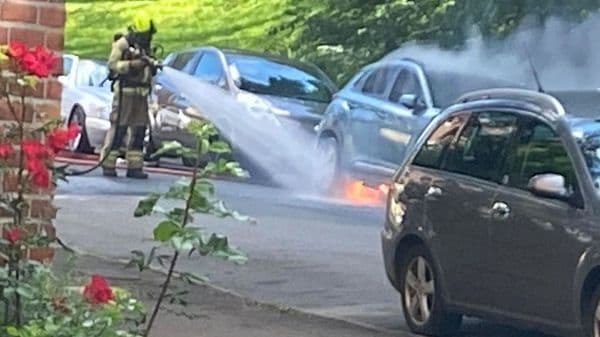 Hyundai last year recalled 77,000 units of the Kona EV over a fire hazard. As it appears, the South Korean automaker is still suffering from the problem even after the recall. The latest fire incident involving a Hyundai Kona EV took place in the Norwegian capital Oslo.

According to a tweet by Oslo police, the cause of the fire is unknown. Also, there was no injury or any other safety concerns reported beyond the presence of smoke. The firefighters were able to control the fire after spraying water on it and then covering it in a fire blanket. After that, a large contained with water was brought to the place and the electric SUV was hoisted up and submerged inside the container, as reported by Avisa Oslo.

Not much details about the fire incident are available. But, the Hyundai Kona EV was parked and not charging when the fire erupted.

The local police put out a message on Twitter after the incident. The tweet reads that the emergency services are on-site in connection with a report of a fire in an electric car. "There is control on-site and it is not burning now. Some smoke still from the car. No danger of spreading. Unknown cause of fire," the tweet further added.

This was not the first time an electric car caught fire. Several fire incidents across the world have been reported involving electric vehicles. battery fires have been a concern for th4e consumers for quite a long time. However, it is not only electric cars, as internal combustion vehicles too experience fires and at higher rates.

For Hyundai as well, the fire incident in Oslo is not the only one involving a Kona EV. Another Hyundai Kona EV caught fire in South Korea while it was parked, reported segye.com.

Hyundai Kona EV is one of the bestselling electric cars from the South Korean brand across the world. It gets power from LG Energy Solution cells. Hyundai has introduced this electric SUV in India as well. It competes with MG ZS EV, Tata Nexon EV in the Indian market.