This 1989 Batmobile replica is built around a 1965 Ford Mustang 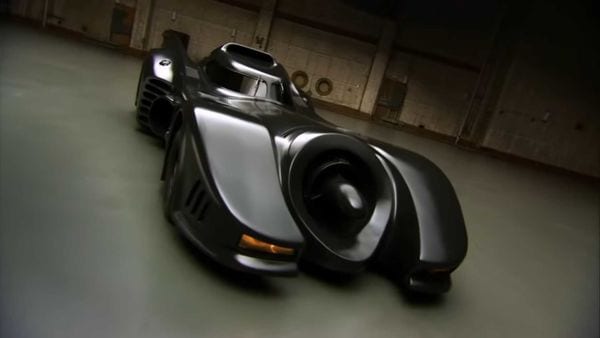 The massive 20 feet long Batmobile doesn’t look like just a show car and built from a space-frame chassis that has been mated to fiberglass body panels. (Image: Motor1)

Batman series movies are known for their superlative degree of actions and gadgets. One of the USPs of the Batman movies is certainly the ride Bruce Wayne takes to chase his nemesis. Throughout the cinematic tenure, the Batman series movies have used several Batmobiles and each of them is unique in its own way.

The actual Batmobiles used in the movies were based on the Chevrolet Impala, but here is a functioning replica of Batmobile from 1989, which is built around a 1965 Ford Mustang. The massive 20 feet long Batmobile doesn’t look like just a show car and built from a space-frame chassis that has been mated to fiberglass body panels.

The actual Batmobiles used in the movies were claimed to have a 10,000 horsepower generating jet turbine engine under the hood, which is capable of catapulting the gigantic vehicle 483 kmph of top speed, this particular functional replica is more conventional. It takes the energy from a 5.7-litre Chevrolet V8 engine that churns out around 380 hp of power output.

Though the image shows the car having two turbochargers, they are not functional or connected to the engine. Hence, they are only cosmetic. It gets a special slide-out door to get into the cockpit. Inside the cockpit, all the components appear very utilitarian, instead of some freaky gadgets the Batman movies showcase. Most of the components inside the cockpit of this particular Ford Mustang-based Batmobile are specific to motorsport. The particular vehicle is claimed to be fun to drive as well, despite lacking the gadgets and tricks, the Batmobiles are known for.

The Batmobiles have been appearing in movies and other live-action media forms since 1943. The first Batmobile was built around a black 1939 Cadillac Series 75 convertible. Later on, various other vehicles such as a 1949 Mercury Eight, 1956 Oldsmobile Rocket 8, Lincoln Futura concept were used to be transformed into Batmobiles.