Tesla Cybertruck reservations at over 1.3 million, worth thrice GDP of Nepal

The wait may be getting longer and longer but reservations for Tesla Cybertruck are also only getting higher.
By : HT Auto Desk
| Updated on: 24 Nov 2021, 10:23 AM 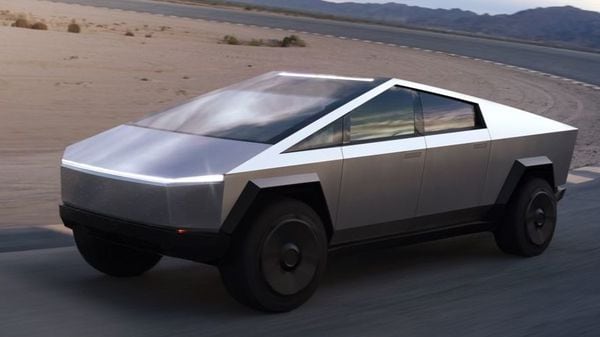 Not a single unit of Tesla Cybertruck has been received by any customer anywhere in the world but only in terms of reservations, the upcoming Tesla is a record breaker of sorts with an estimated 1.3 million units booked and the amount totaling approximately $80 billion.

Tesla Cybertruck had been showcased for the first time ever in November of 2019 and has been touted as a battery-powered vehicle with the capability of a pick-up but performance of a sportscar. It came as very little surprise that many across the world rushed to pay the reservation amount of $1,000. In the first week itself, Tesla reportedly received over 2.5 lakh orders.

And this figure has only grown even if deliveries have consistently been delayed.

Tesla CEO Elon Musk has hinted that production of Cybertruck may not kickstart till at least late 2022. A range of factors may be pushing back delivery timelines and the semiconductor shortage isn't helping matters either.

But what may be remarkable is the sheer and staggering number of reservation orders that Tesla will have to fulfill once Cybertruck does hit production lines. Many regard F-150 Lightening as the main rival for Cybertruck but while around two lakh reservations for the Ford EV is impressive, it is far lower than that of the Tesla product. Even GM has launched its electric Hummer and it is said to be faring well even if booking numbers, in comparison to Cybertruck, are low.

Tesla has a massive cult following across the globe which plays a role in generating a big hype around its products. And this hype was amplified when Cybertruck was first showcased to the world, then hit by a sledgehammer in a failed attempt to show how strong its windows are. But with claims of a range of nearly 950 kms, acceleration to 100 kmph in 3 seconds and capability to tow up to 6,300 kilos, this EV could well leave others biting the dust, once launched of course.