Tata Motors has entered the CNG fray with factory-fitted kits on the Tiago and Tigor. But Maruti Suzuki has been betting big on CNG for quite some time with the 2021 Celerio the latest to join list.
By : HT Auto Desk
| Updated on: 17 Feb 2022, 11:20 AM 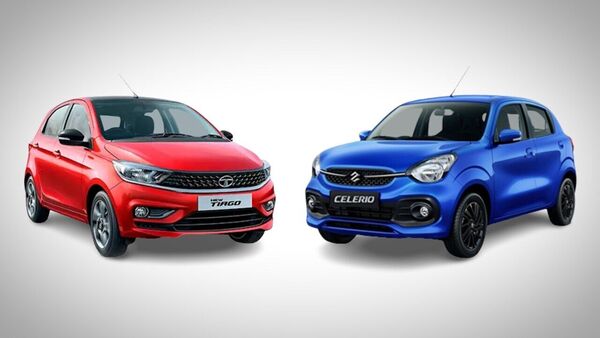 Tata Tiago (L) and Maruti Suzuki Celerio are both strong performers in the small PV segment.

For long, Celerio and Tiago have been fierce rivals in the Indian car market with both models performing well and striking a chord with prospective buyers. While Tata Motors launched the Tiago NRG with some very attractive cosmetic updates last year, Maruti Suzuki also brought out the refreshed Celerio last year in order to wow a younger car-buying audience. What is perhaps most interesting though is that both Celerio and the Tiago now also have the CNG option available.

While Maruti has been betting big on CNG technology and offers S-CNG company-fitted kits on a number of its models, Tata Motors entered the fray earlier this year by bringing CNG to Tiago and Tigor sedan. Both companies clearly see a rising demand for vehicles with factory-fitted CNG and believe that with the rise in the number of CNG pumps, the popularity of such vehicles would only grow.

Maruti Suzuki Celerio has CNG on only one - VXi - variant which is priced at ₹6.58 lakh (ex showroom). Tiago, however, offers CNG on a number of variants like XE, XM, XT, XZ+ and XZ+ dual-tone with prices ranging between ₹6.09 lakh and ₹7.64 lakh (ex showroom).

While Celerio VXi is fairly well kitted, it is the Tiago that is banking on buyers who prefer CNG to not lose out on higher-end features - visual or practical.

The Celerio gets a 1.0-litre petrol engine under the hood which, with CNG kit installed, puts out 57 hp and has peak torque of 82 Nm. The Tiago, on the other hand, has a slightly more powerful 1.2-litre engine with 72 hp and 95 Nm of torque on offer. Both models come with manual gearbox.

While Tiago does offer more power, the Celerio has better claimed CNG mileage - 35.60 km/kg vs 26.49 km/kg from Tiago.

Both vehicles have a similar-sized CNG tank.

Since Celerio CNG is only offered in the VXi trim, it gets features like reverse parking sensors, front and back power windows, power-adjustable ORVMs, among others.

Because Tiago CNG is offered on a number of trims, it obviously gets more features in the higher trims like LED DRLs, powered ORVMs, reverse camera, rear defogger.