The Tata Tiago CNG variant is likely to go on sale in India in the next few months. It can be seen wearing CNG stickers on the front and rear glass panels.
By : HT Auto Desk
| Written By : Prashant Singh
| Updated on: 11 May 2021, 13:01 PM 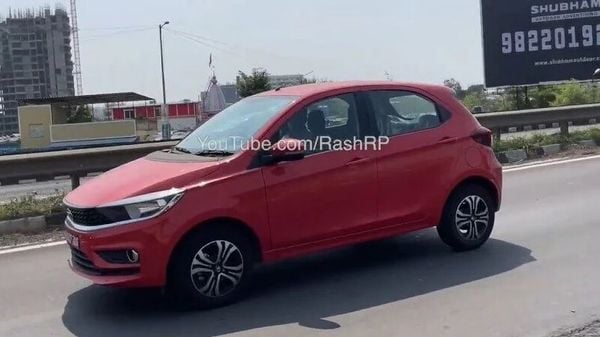 The spotted prototype of the CNG-powered Tata Tiago is likely a mid-spec variant. Image Credits: YouTube/RashRP

Tata Motors is gearing up to introduce a CNG-powered Tiago hatchback in the Indian market. Along with Tiago, the Tigor sedan is also likely to come kitted with the same technology in the future. Now a CNG-kitted variant of the Tiago hatchback has been spotted getting tested on the public roads in a completely undisguised form. The same model is expected to go on sale in the Indian market in the next few months.

The spy images suggest that the spotted prototype is likely a mid-spec variant adorning the bright red paint scheme. For the record, this body paint is already available in Tiago's existing petrol-sipping model. A closer look also reveals the CNG-powered Tiago can also be seen wearing CNG stickers on the front and rear glass panels. It will also benefit from new multi-spoke alloy wheels.

At the front, it gets a familiar tri-arrow theme on the front grille. Some other exterior features as visible in the new images include projector headlamps, LED DRLs, fog lamps, shark fin antenna, LED high mount stop lamp, LED taillights and more. While the cabin details aren't clear, the interior is likely to remain identical in comparison to the existing petrol-powered models. 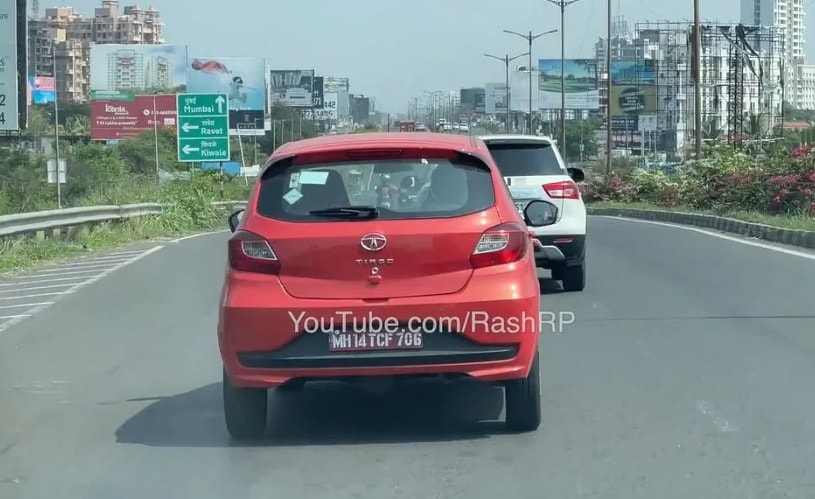 Tata Tiago CNG will be a direct rival to the likes of Maruti Suzuki WagonR CNG, Hyundai Santro CNG and others. Image Credits: YouTube/RashRP

Under the hood, there will be most likely the same 1.2-litre Revotron petrol engine paired to a 5-seed manual transmission. While the engine currently develops 85 bhp of maximum power and 113 Nm of peak torque, the CNG-powered unit is likely to pump out lesser output.

The Tata Tiago hatchback is currently present in a total of nine variants and four trim options - XE, XT, XZ and XZ+. The pricing starts from ₹ 4.99 lakh and extends up to ₹ 6.95 lakh (ex-showroom, Delhi).

It is a direct rival to the likes of Maruti Suzuki WagonR CNG, Hyundai Santro CNG and others.