Altroz is designed under Impact design 2.0 language and will be the first to be developed on the new ALFA architecture. The company says this helps the car tick the right boxes - both in terms of looks and performance.Altroz will compete against Baleno and Elite i20 once launched in January 2020.
By : HT Auto Desk
| Updated on: 27 Nov 2019, 06:15 PM 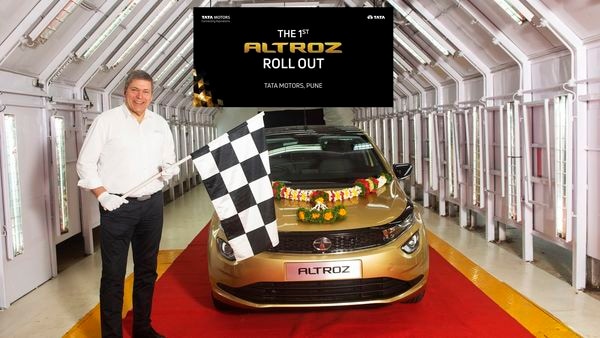 The hatchback game in India is all set to welcome a new player with Tata Motors readying Altroz in a bid to corner share in the highly-competitive segment. The first Altroz was rolled out from the company's plant in Pune on Wednesday and the official launch will take place in January of 2020.

Tata Motors has put a lot of its hopes on the Altroz even if the hatchback segment in the country isn't faring too well. Pegged as a premium offering, the Altroz is designed under the Impact design 2.0 language and will be the first to be developed on the new ALFA architecture. The company claims this will help in the car not only sporting good and appealing looks but match it all with commendable performance. "The ALTROZ is our first product that will be launched on the all-new ALFA platform and we believe that it will raise the bar for vehicles across the premium hatchback segment, come 2020," said Mayank Pareek, President, Passenger Vehicle Business Unit (PVBU), Tata Motors.

Pareek also said that the car will benefit from heightened expectations. "Since the unveiling of the concept in 2018, the anticipation for Altroz has always been high," he said, adding that the car will boast of a host of smart features, many of which are one segment above.

Tata Motors had first showcased the 45X concept at the Auto Expo in February 2018, followed by a display at the Geneva International Motor Show (GIMS) in March 2018.

Once launched, The Altroz will rival the likes of Baleno from Maruti Suzuki and the Elite i20 from Hyundai.