The spy image clearly shows that the Jimny being tested is significantly larger than the models that are available currently across the world.
By : HT Auto Desk
| Updated on: 17 Mar 2021, 11:26 AM 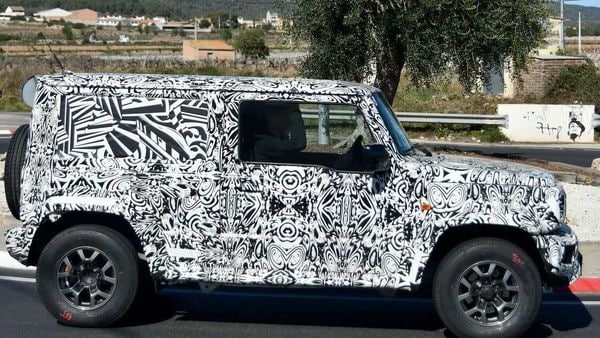 The Suzuki Jimny SUV, wrapped in a camouflage, was seen testing on European roads recently.

The carmaker has not yet announced anything about bring the SUV to the Indian markets yet. But, it is highly speculated to be launched here, possibly with a longer wheelbase that will allow the carmaker to add two doors to make it more spacious and practical for the domestic buyers.

The Jimny SUV has recently been spotted testing on roads in Europe, wrapped in a camouflage. The image clearly shows that the Jimny being tested is significantly larger than the models that are available currently across the world.

A closer look will reveal that the SUV has grown a bit between the B and the C pillar with a possibly sealed-off rear-window, just like Mahindra Thar’s hard-top version. While there are speculations that Maruti will bring in a 5-door Jimny SUV to India, the picture does not give any impression of any added door.

Apart from the extra distance between the front and rear axles, the Jimny in camouflage looks pretty much the same as the Jimny's shorter configuration, complete with rear-mounted spare wheels similar to the Mercedes G-Class.

Currently, Maruti Suzuki manufactures three-door Jimny SUVs at its Manesar plant in Gurugram that are exported to other countries. The 'Made in India' Jimny stands 3,645 mm in length, 1,645 mm in width and a height of 1,720 mm. The global version, which is known in Japan as the Jimny Sierra, is slightly smaller in size and stands 3,550 mm long.

The Jimny SUV is powered by a 1.5 litre petrol engine, mated to a 5-speed manual or a 4-speed automatic gearbox, that churns out 100bhp of power and 130Nm of torque.

The Made-in-India Jimny SUVs are presently exported to countries in South America, the Middle East and African markets. The carmaker is expected to upgrade the model sometime this year. Despite all the speculations, questions still remain whether Maruti will bring in this iconic off-roader to India, with the tweaks that may make it more acceptable for the market.