Ford is planning several new SUVs for the Indian market.Ford is working in collaboration with Mahindra to launch new SUVs in India.The upcoming Ford SUV will have its front grille inspired from the Ford Equator SUV which is sold in China.
By : HT Auto Desk
| Updated on: 08 Dec 2020, 15:29 PM 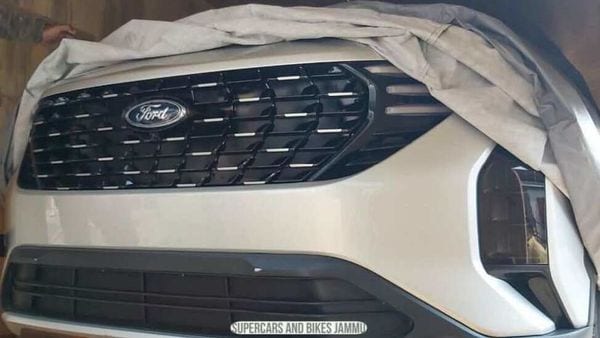 Front main grille of the upcoming Ford SUV resembles the Equator SUV which is a strictly China-only product. Credits: Instagram/Supercarsandbikesjammu

Ford has several new products on the cards for the Indian market and the list majorly includes SUVs made in collaboration with Mahindra. One of the India bound Ford SUVs have now been spotted and the image reveals prominent information on the car's front fascia which is nothing like anything seen from Ford. Also, the new design is strikingly different from the company's products offered in the international markets. The only close resemblance to the new Ford SUV include the Equator SUV which is a strictly China-only product.

The spy image (above) shares a detailed glimpse of the new frameless front main grille which comes dipped in black. It sports a chequered design which contributes to a sporty look. While the headlamp units stay undercover, there are three horizontal daytime running lamps over the sides which supposedly join the front main light assembly. Lower below sits a very intimidating looking ‘X’ shaped bumper which houses vertically stacked fog light clusters.

Ford is planning several new SUVs for India. There is a C-SUV which will be based on Mahindra's upcoming XUV500 and will be designed by Mahindra-owned Italian design house Pininfarina. This SUV will share several technical aspects with the XUV500 including the chassis, suspension and engines. Goes without saying, the setup will re-tuned to match the Ford's requirements. Moreover, there will also a B-SUV planned by Ford for India which is also being co-developed with the help of Mahindra. The mystery SUV in the latest spyshot (above) could be anyone of them.

In addition to this, Ford is also developing the new-gen EcoSport which is currently being developed in Brazil and will see the light of the day sometime around the middle of 2021.