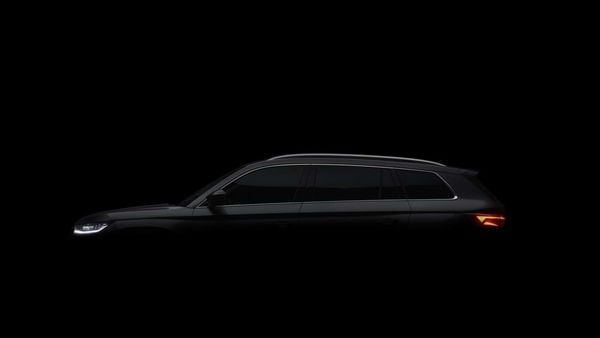 Skoda Kodiaq facelift version is all set to make its debut on April 13.

When Skoda debuts the new Kodiaq SUV tomorrow, there will be little surprise in store as the carmaker has teased a lot of details on the facelift version of its popular SUV.

In the latest teaser, and probably the last before its world premiere, Skoda has shared an image of the silhouetted Kodiaq from the sides, highlighting its stooping roofline with roof rails, the body lines and the extended headlights and tail lights.

In its earlier teasers, Skoda has shared several details about the changes implemented on the new Kodiaq SUV. A recent teaser video, which gives an idea about the design changes Kodiaq has gone through, shows the SUV in silhouette with only the bright LED headlights.

Skoda had also released sketches of the SUV earlier, which showcased the exterior design details of the new Kodiaq. The sketches give an idea of how the redesigned hood, the more vertical, hexagonal Skoda grille with double rails will look like.

According to all the teasers, the front apron of the Kodiaq SUV will be redesigned with wider air intakes. The bumper will be a lot more aggressive with "L" -shaped details on it. The LED light cluster will be split in two segments. The LED headlights will be slimmer while a separate casing below will house the fog lamps.

The tail lights too have been redesigned. They now appear a lot thinner with more edges and are now characterised by the typical "Crystal Lighting" texture of the Bohemian House.

First launched in 2016, Kodiaq was Skoda's first mid-size SUV ever and marked the beginning of the current Skoda SUV range of cars across the world. It also started the Skoda's naming convention of its vehicles with the letter K.

The only details that are now left to be revealed are the interiors and the engine specifications. It is likely to be powered by a 2.0-litre TDI Evo engine developed by Volkswagen. In addition, a plug-in hybrid version of Kodiaq is also expected. It is possible that the lineup will also include an RS version of the SUV with a 2.0-litre TSI turbo petrol engine that can produce 240 hp of power.