Skoda Kushaq now gets several features as standard across variants while also getting an additional NSR variant.
By : HT Auto Desk
| Updated on: 21 Jul 2022, 13:26 PM 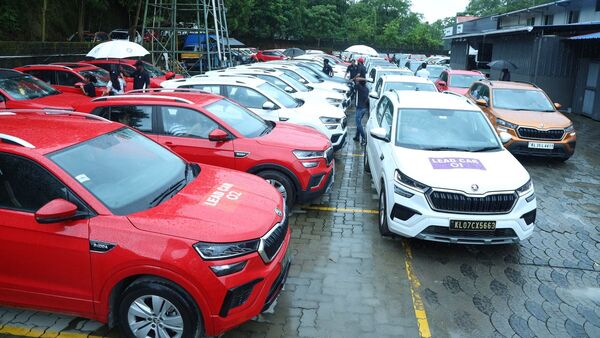 Skoda Kushaq was the first model from the manufacturer under its India 2.0 Project.

Skoda Kushaq has completed a year in the Indian market and as part of the celebrations, the company has brought in several updates to the sedan, some being standard across all variants. Skoda Kushaq now gets Tyre Pressure Monitoring System (TPMS) as standard across all the variants. The 1.0-litre TSI engine now gets an idle start/stop system as standard. The company claims this helps improve fuel efficiency of the 1.0-litre engine by 7 to 9 per cent.

Besides this, the Kushaq's Style variant now comes with a 20.32 cm Virtual Cockpit which is essentially a digital instrument cluster. This feature was already available on the Monte Carlo variant. The manufacturer has also added a new 8-inch infotainment system which comes with knobs and switches.

Skoda has also updated the headliner of all the Kushaq's variants. There is also a new NSR or Non-sunroof Style variant that sits between Ambition and Style trims. As the name suggests, the new variant misses out on an electric sunroof. It is based on the 1.0 TSI Style variant and will be offered only with a 6-speed manual gearbox. It does not come with a digital instrument cluster. Instead, it continues to get an analogue instrument cluster with four dials.