McLaughlin won IndyCar's virtual race from virtual Barber Motorsports Park in Alabama, the second race in the series' attempt to create content during the worldwide shutdown of sports.
By : PTI
| Updated on: 05 Apr 2020, 12:14 PM 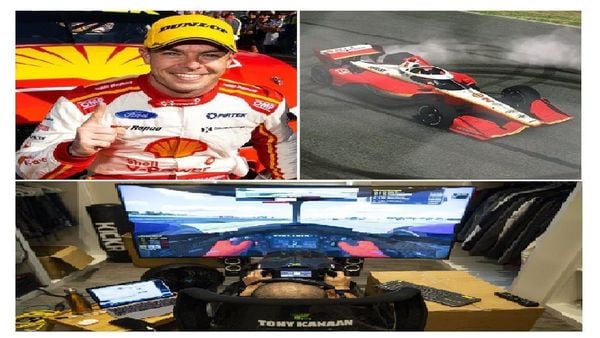 Scott McLaughlin's real IndyCar debut is on hold because of the coronavirus pandemic. The Australian V8 SuperCars champion isn't letting that stop him from learning how to virtually drive the cars.

McLaughlin won IndyCar's virtual race from virtual Barber Motorsports Park in Alabama, the second race in the series' attempt to create content during the worldwide shutdown of sports.

McLaughlin drives for Roger Penske in Australia and the team owner had planned to give McLaughlin his series debut in May on the road course at Indianapolis Motor Speedway.

That plan was scrapped when the IndyCar season was suspended last month. The road course race has been tentatively rescheduled for July 4, a date Penske said would be too hectic for McLaughlin to make his debut.

McLaughlin, like NASCAR's seven-time champion Jimmie Johnson, was an invited guest by IndyCar to participate in the iRacing Series meant to entertain fans during the stoppage. He had to wake up at 2 a.m. in Brisbane, Australia, to compete on his simulator.

“I started iRacing 10 years ago and it was the best thing I did," said McLaughlin.

“For an aspiring race car driver, it is worth the investment in your future. It's been an awesome tool for me and it's great fun."

McLaughlin said his rig was not as flashy as some of the big simulators used by the stars and his is actually set for a touring car. It was 6 a.m. at McLaughlin's house when he virtually crossed the finish line.

“You know, eSports has really been on the rise the last few years, and it's really taken off during this pandemic," McLaughlin said.

He beat Team Penske driver Will Power, a fellow Australian who was racing from his home in North Carolina, Scott Speed and IndyCar rookie Alex Palou, racing on a simulator in Spain.

NBC Sports aired the race on its cable channel with its usual broadcast crew of Leigh Diffey, Townsend Bell and Paul Tracy all calling action from their respective homes. IRacing controlled the feed, but drivers used their own social media channels to give viewers a closer look at their experience.

Robert Wickens participated for the first time after a delay in the delivery of his steering wheel kept him out of last week's race. Wickens suffered a spinal cord injury in a 2018 crash and needed a wheel with hand controls.

He secured two this week – one made by McLaren, the other by Max Papis' steering wheel production company – but got in just two days of practice before Saturday's race.

He used the McLaren wheel Saturday and the view he gave fans on his social media channel allowed them to see him use the hand controls. Wickens finished eighth.

“My return to IndyCar was exactly how I imagined it – in my basement. No, I'm just kidding," Wickens said.

“In a lot of ways it felt like the real thing, my eyes are burning. My first race back in IndyCar, a top 10."

The most entertaining driver through the race was Conor Daly on one of his social media feeds, where he lamented, “this is literally the least fun I've had the entire quarantine," after he was run off course.

“You know this isn't real life because Dixon just spun a car. There's no way that would happen in real life," Daly said of the driver known as “The Iceman" for his cool demeanor. Dixon did not participate in IndyCar's first iRacing event last week, made his debut Saturday and finished 16th.

Daly also alerted viewers that Power on his radio had called Dixon “a wanker" — an offense that led iRacing to cut Power's chat ability.

Johnson, eyeing IndyCar racing once he's completed his NASCAR career, had his best iRace to date with a 12th-place finish. He finished on the lead lap. Johnson was scheduled to test an Indy car for McLaren at Barber this month but it was canceled as most states have issued stay-at-home orders.

Sage Karam, winner of last week's IndyCar virtual race, led most of the laps and started from the pole for the second consecutive week. He wrecked after a pit stop and stopped racing, but denied “rage quitting" the race.