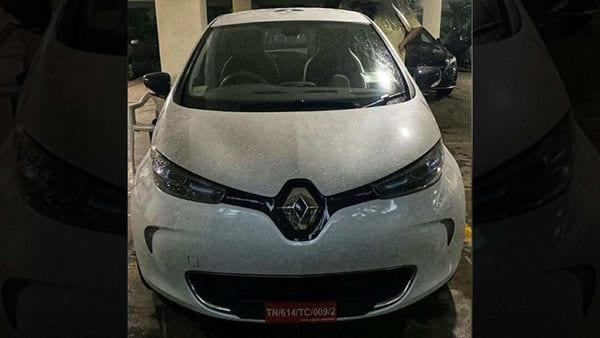 Renault Zoe EV, the French auto major’s most popular electric offering in Europe, has been spotted testing on Indian roads. Photos of a Renault Zoe electric hatchback with a temporary Tamil Nadu licence plate was shared on social media, triggering speculation that the carmaker may launch it in India soon.

Currently Renault has three offerings in India - the Kwid hatchback, Triber MPV and Duster SUV. It recently discontinued Captur, which is a popular crossover in European markets. Despite having several electric vehicles in its portfolio, like Twizy, Kangoo and Master besides Zoe, Renault has not offered any to India, where electric mobility is still far from being mainstream.

Renault Zoe, which had a midlife upgrade recently, has a range of up to 395 kilometres in the WLTP test cycle. The new ZE 50 lithium-ion battery with a capacity of 52 kWh forms the basis for the range it offers. The new R135 electric motor, which was developed entirely in-house, mobilises an output of 135 PS of power and a maximum torque of 245 Nm.

Zoe has a B-Mode driving program which enables single-pedal driving for the first time. Instead of applying the brake, in most cases the recuperation delay is sufficient. During recuperation, the Zoe's electric motor acts like a generator that feeds electricity into the battery. The consistent use of the B-mode therefore brings range advantages. The B-mode is already part of the standard equipment and is active from a driving speed of 7 kmph.

As a supplement to the electronic parking brake, the new Zoe has the hill start aid with auto-hold function as standard . This allows the driver to take his foot off the brake when the vehicle is stationary and keeps the Zoe in a stationary position even on inclines and declines.

The modified look of the electrical bestseller from Renault includes newly cut headlights in LED technology, a larger brand emblem in hologram style and with a blue border in the top INTENS equipment. The front apron with a large cooling air opening and LED fog lights with chrome surrounds is also significantly tighter than the previous generation.

The rear lights, which are located far on the outside and visually broaden the vehicle, are also made entirely of LED technology. Integrated are indicators with running lights. There are more indicators in the exterior mirror housings. A selection of new wheel covers and wheels in 15-, 16- and 17-inch formats as well as the new body paintwork in aquamarine blue, quartz white and DeZir red round off the modern and dynamic appearance.

The redesigned cockpit is characterised by the individually customisable instrument cluster with 10-inch TFT display, the new E-Shifter lever and the centrally located touchscreen for the standard networked multimedia navigation system Easy Link.