Renault Kwid, Kiger and Triber prices go up amid hikes by several carmakers

Renault has hiked prices of its cars for the third time this year since January. The last price hike was implemented back in April, at the start of the new financial year.
By : HT Auto Desk
| Updated on: 06 Jun 2022, 10:22 AM 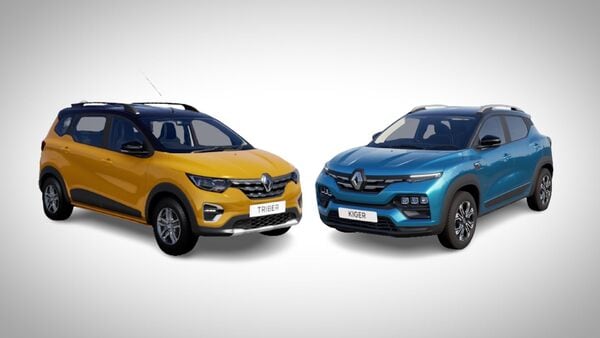 Renault has hiked the prices of the Kiger SUV and Triber MPV along with its popular hatchback Kwid from June.

Renault in India has increased the prices of its cars once again. In the third hike in last six months, Renault has implemented price increase across its models ranging from Kwid, Kiger and Triber. The price of the vehicles have been increased by up to ₹17,500 depending on model and variants. The increase in price is uniform across all variants of the Kiger hatchback and Triber MPV. With the latests price hike, Renault India has joined a list of carmakers who have increased prices of their cars with effect from June.

According to the new price list shared by the French carmaker on its official website, the biggest hike has been implemented on Renault's latest and flagship offering Kiger sub-compact SUV. The hike in Kiger prices come close to the heels of its rival Nissan increasing the price of the Magnite SUV. The price of the Magnite SUV now starts from ₹6 lakh (ex-showroom) for the base RXE 1.0-litre Energy variant with manual transmission. The top-spec RXZ X-Tronic (CVT) 1.0-litre Turbo Dual Tone variant will now come at an ex-showroom price of ₹10.57 lakh.

The price of the Kwid, of one of the popular hatchback in the market, has also gone up by 12,500 across all its variants. According to the new price list, the Kwid hatchback will now be available at a starting price of ₹4.62 lakh (ex-showroom) for the base RXL 800cc models. The top-spec Kwid Climber Easy-R variant price has been increased to ₹5.96 lakh (ex-showroom).

Renault Triber, one of the safest MPVs on Indian roads according to Global NCAP crash tests, has also received a price hike of ₹12,400 on each of the variants. The price of the seven-seater three-row MPV now starts from ₹5.88 lakh for the base RXE variant. The price goes up to ₹8.44 lakh for the top-of-the-range RXZ Easy-R Dualtone variant.