The pink Volkswagen Beach Bomb prototype made by Hot Wheels never made it to the stores for sale.Only two of these were produced as these couldn't stay upright when rolled.
By : HT Auto Desk
| Updated on: 07 Dec 2020, 14:29 PM

One of the most valuable Volkswagens ever produced is also one of the tiniest - a pink 'Beach Bomb' Hot Wheels prototype. And this 1:64 scale model has held its value ever since it was produced in 1969 when Volkswagen and Hot Wheels first collaborated.

Only two of these prototypes were built and had a narrow body and surf boards hanging out of the back window. But these couldn't stay upright when rolled. Thus, these never made it for sale officially and were only accessible to employees.

Eventually, the model was redesigned for production and was sold with a sticker sheet of flowers to decorate the vehicle, epitomizing the 1970s 'flower power' era. These new models were painted in purple, green, red, light blue and gold. There were only a few pinks in the redesigned model range. However, the pink prototypes became the rarest of these models. 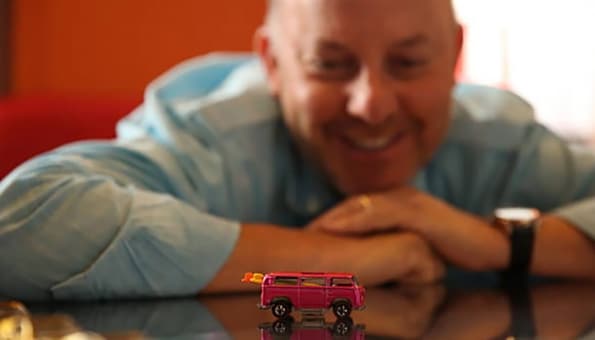 These pink, rear-loading Beach Bombs ultimately came to be in the possession of Bruce Pascal - a collector who owns a 7000-piece Hot Wheels collection in Maryland. Pascal sold one of them to another friend and collector but the one in the best condition has stayed with him, and is worth $150,000 today. This is well over the cost of most new luxury vehicles and more than 50 times the cost of the models that made it to stores. “This model was a huge win for my collection," Pascal said.

The rare pink Volkswagen Beach Bomb bus stays in a dark, plexiglass case in order to prevent it from sun damage. The owner displays it in his personal museum in Maryland where he gives private tours to other Hot Wheels enthusiasts. “I want other people to experience the Beach Bomb," he said.

Hot Wheels is putting out 42 Volkswagen models this year but none of those would be worth what the 'Beach Bomb' is.