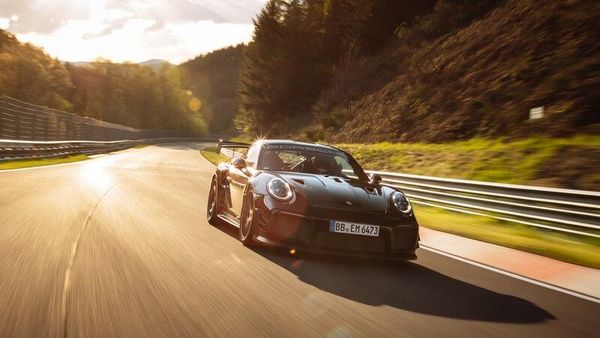 The 911 GT2 RS was kitted with the Manthey Performance Kit.

Porsche has managed to set a new lap record for road-legal production cars on the legendary Nuerburgring Nordschleife circuit in a 911 GT2 RS. The car was kitted with the Manthey Performance Kit that is developed by Porsche's engineers in collaboration with Weissach and Manthey-Racing’s track specialists.

Porsche's development driver Lars Kern sat behind the wheel of the 700 PS (515 kW) producing 911 GT2 RS. The car did its fastest lap around the 20.8-kilometre long Nuerburgring Nordschleife circuit in 6:43.300 minutes. The record was set on June 14th. The German carmaker said in a recent press note that the plan was to beat the existing 6:48.047 road-car record that was set on road-legal Michelin Pilot Sport Cup 2 R tyres.

“Our GT customers often use their cars on circuit, such as on track days," says Frank-Steffen Walliser, Vice President Model Lines 911/718. “The engineers at Manthey and Porsche have together developed a perfectly tuned package that allows the 911 GT2 RS to deliver even higher performance."

Lars Kern broke the record despite the high-summer conditions with track temperature reaching up to 41 degrees. “The 911 GT2 RS sticks to the track like glue with the Manthey Performance Kit. You feel as if you’re in a racing car, especially on faster corners. It is truly breath-taking how the car puts its 700 PS down, and how incredibly well it brakes while always remaining easy to control," says Kern.