Kia Sonet has been an instant success in the little over a month since its launch. Nissan, however, is readying Magnite to challenge its strong initial showing.
By : HT Auto Desk
| Updated on: 03 Nov 2020, 15:37 PM 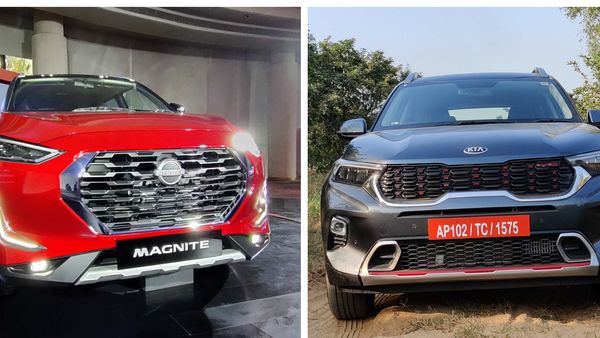 Nissan Magnite and Kia Sonet underline the emphasis that OEMs are attaching to the sub-compact SUV segment in India.

Kia Sonet has been the biggest entrant in the extremely lucrative sub-compact SUV segment in India. With the promise of stellar looks, multiple engine and transmission options, confident drive capabilities and - most importantly - loaded features, Sonet has taken the market by storm and propelled Kia to a position of strength. And while it has managed to challenge established giants in the space like Hyundai Venue and Maruti Suzuki Vitara Brezza, the newest challenger is soon going to be challenged by an even newer player in the field - Nissan Magnite.

While Kia has only been in India for a little over a year and has managed to become a household name of sorts, Nissan has been here for far longer but with limited success and popularity. As a car, Magnite hopes to drum up the sub-compact SUV segment but as an offering, it has the pressure of establishing's Nissan's prowess.

Magnite recently hit production lines at the company's plant in Chennai and an official launch is expected soon. The Japanese car maker has now officially confirmed its engine transmission and colour highlights - among others, and on paper at least, Magnite appears well armoured for the battle ahead.

First in its crosshairs would be the Sonet because here is where the current buzz is firmly at.

Magnite, in contrast of sorts, will be offered only with petrol engines - a 1.0-litre B4D dual-VVT naturally aspirated unit and a 1.0-litre HRA0 turbocharged unit. Reports suggest that max power figure will be in the range between 71 bhp and 98 bhp. Similarly, torque figures would be between 96 Nm and 160 Nm.

Sonet may well have the edge when it comes to features on offer but Nissan will offer a Tech pack at the time of launch which could also bolster its image in this regard.

Because Magnite is being widely seen as a make-or-break offering for Nissan, the company is likely to use an extremely competitive price structure as the biggest weapon to undercut rivals with. For now though, the wait for Magnite's official launch continues.