Nissan Magnite SUV prices hiked by up to ₹41,000, two variants pulled out

This is the third price hike on the Magnite sub-compact SUV implemented by Nissan this year after one in January and the second in April. Nissan recently announced that Magnite has received one lakh bookings since its launch 18 months ago.
By : HT Auto Desk
| Updated on: 06 Jun 2022, 09:22 AM 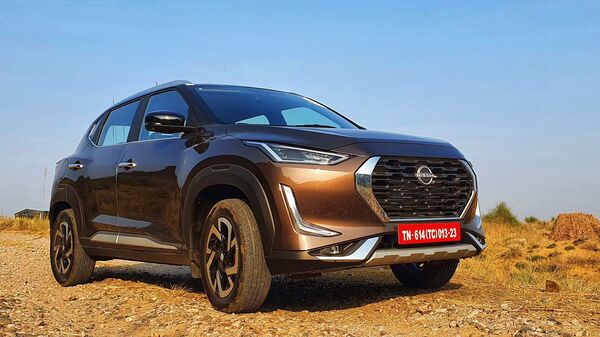 Nissan Magnite sub-compact SUV, which is one of the most affordable in its segment, has seen price hike of up to ₹41,000 in June. (HT Auto/Sabyasachi Dasgupta)

Nissan India has hiked the prices of its flagship Magnite sub-compact SUV with effect from this month. The SUV, considered as one of the most affordable in the sub-compact SUV segment, has seen a hike of up to ₹41,000 depending on variants. The price of the Magnite SUV now starts from ₹5.88 lakh (ex-showroom) and goes up to ₹10.20 lakh (ex-showroom). This is the third price hike implemented by Nissan since January this year. Besides hiking the price, Nissan India has also discontinued at least two variants of the Magnite SUV.

According to the latest price list updated by Nissan India on its official website, the price of Magnite has seen the least hike in its base variants. The XE variant, which earlier was priced at ₹5.85 lakh, will now cost around ₹3,000 more off the showroom. The XL variant, which sits one above, has seen a hike of ₹3,400 and will be available at ₹6.80 lakh.

The biggest hikes have been implemented in some of the top-spec variants of the Magnite SUV. In the mid-spec trim, the XV Turbo variant has seen its price go up by more than ₹33,000. It will now cost ₹8.77 lakh instead of ₹8.44 lakh (ex-showroom). The top-of-the-range XV Premium Turbo CVT variant, which was priced just under ₹10 lakh, will now cost ₹10.20 lakh (ex-showroom) after a hike of ₹20,000. However, the biggest jump in prices has been implemented on the XV Turbo CVT variant, which sits one under the top-spec Premium Turbo CVT. It is now costlier by more than ₹41,000. The price has gone up from ₹9.26 lakh to ₹9.67 lakh (ex-showroom).

Nissan India has also pulled out two variants from the Magnite SUV lineup. The two variants that have been discontinued are the mid-spec XV Premium and the XL Turbo CVT. However, the Japanese carmaker has not given any particular reason behind this decision.

Nissan recently announced that Magnite SUV has garnered one lakh bookings since its launch in India back in December, 2020. It was launched at an introductory starting price of ₹4.99 lakh (ex showroom) and was India's most affordable sub-compact SUV back then.