Nissan Magnite is ready to step into a lucrative and highly competitive field of sub-compact SUVs in the Indian market.
By : HT Auto Desk
| Updated on: 30 Oct 2020, 08:37 PM 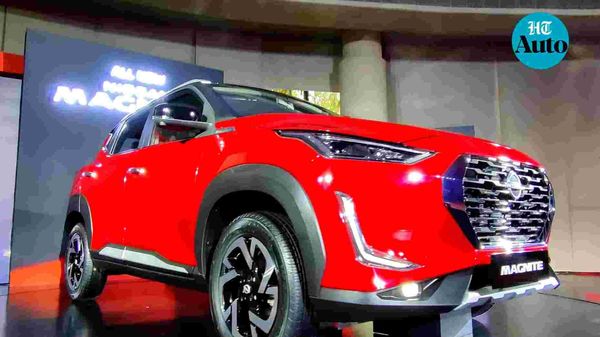 Nissan Magnite is widely considered a make-or-break product from the Japanese car maker that has seen its fortunes erode in recent times in India. With the buzz around sub-compact SUVs now at a crescendo, the segment does offer a whole lot of potential for revival to Nissan as it gets set to launch Magnite in the market here. While the company has officially showcased the production version of the car, the bookings may open soon.

Magnite holds a lot of promise as a solid offering from Nissan, one that claims to not just stand apart from its siblings but also stand out in a sea of sub-compact SUVs. A large part of its appeal lies in how it has been designed on the outside while promising to have oodles of space and refinement on the inside. The L-shaped DRLs and LED fog lamps add to the appeal of the front fascia of the vehicle while a large black grille featuring wide chrome slats on either side give it a rather purposeful appeal. The alloys look nice as well while the rear has a simple, clean yet stylish appeal. On top are functional roof rails while Nissan claims added padding on all four doors not only add to the premium quotient of the car but seek to block out outside noise.

The cabin of the Magnite too is a major step forward from other cars in the Nissan stable. A high seating position for the driver as well as occupants seeks to re-enforce the SUV claim whilea 5-degree tilt of centre stack for driver-centric cockpit feel, a mammoth 10-litre glovebox, 8-inch full flash touch screen and 7-inch TFT instrument cluster unit are some of the other highlights here. A Tech pack will be made available as an optional at launch and this would include wireless charging, ambient lights and air purifier - among others - to lead the feature list of the car.

Nissan is highlighting the X-Tronic CVT gearbox and a host of safety features that the Magnite boasts of. And while the engine output figures are not officially known, expect Magnite to also make use of a turbo engine once launched in the market.

Speculations about pricing are aplenty but strong indications are that Nissan could undercut the likes of Kia Sonet, Hyundai Venue and Toyota Urban Cruiser - variant for variant - when Magnite is officially launched. This is possibly adding to the buzz around the car and could potentially propel Magnite to a spot of prominence against riv