Mahindra Scorpio is entering a new generation later this year.2022 Scorpio might come with a 2.2L 4-cylinder turbocharged diesel engine.
By : HT Auto Desk
| Written By : Prashant Singh
| Updated on: 14 May 2022, 11:23 AM A unit of the 2022 Scorpio in white colour scheme can be seen rolling off from the production line.

Mahindra Scorpio is entering a new generation later this year. The company has also teased the arrival of the all-new Scorpio in teaser clips a few days back, and now images of the SUV from the production line are seen doing rounds on the internet, indicating that the company has commenced the production run of the model ahead of the official launch.

A unit of the 2022 Scorpio in white can be seen rolling off from the production line. At the front, there are several new elements including the use of a vertical slat grille, a new Mahindra logo that replaces the older oval unit, C-shaped LED DRLs with fog lamps, and many more. One of the key updates on the car includes the use of a double-barrel headlight which is flanked by chrome underlining.

(Also Read: Scorpio to Bolero: Mahindra offers heavy discounts on these cars in May)

Over the side, the new Scorpio features new wheels which are likely 18-inches, and there is also a slightly raked chrome beltline rising from the C-pillar. However, unlike the XUV700 there is no flush design for the grab handles, while the body cladding gets silver inserts. 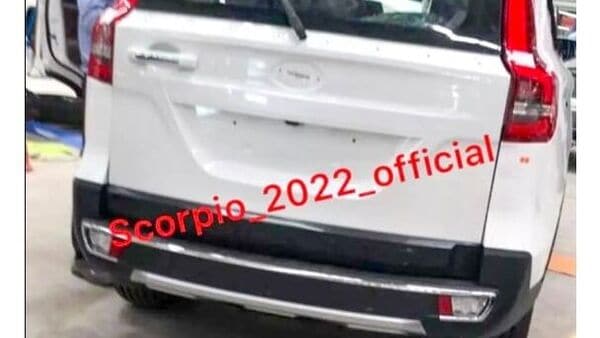 The rear section of the SUV can be seen with a redesigned side-hinged tailgate. (Scorpio_2022_Official)

One of the images also shows the rear section of the SUV with a redesigned side-hinged tailgate. Down below, the rear bumper features a fairly flatter profile, unlike the outgoing model. Also, there are two reverse lights on either side of the bumper and a chrome strip bridging them both.

Under the hood, expect the car to come with a 2.2L 4-cylinder turbocharged diesel engine which is likely to be mated to either a 6-speed manual or a 6-speed automatic. The official launch of the new-gen Scorpio is likely to take place in the next few months. The pricing is likely to start from ₹12 lakh and extend up to ₹18 lakh (ex-showroom).