The new Nissan Kicks has design reflections of the Nissan Ariya crossover concept, especially at the front.
By : Prashant Singh
| Updated on: 10 Apr 2020, 01:11 PM 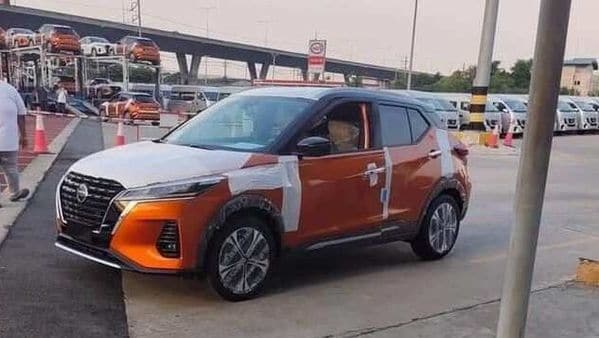 Nissan Kicks facelift has been spied once again in Thailand and the latest image clearly unfolds all the exterior design changes the mid-cycle update will introduce in the new Kicks.

Previously its official debut was rumored for March, but it looks like it is still weeks away from the launch date.

The new Nissan Kicks will have fairly revised exteriors. It will sport sharper looking front-end with longer and sleeker headlamps. The V-Motion grille has been heavily tweaked, it has grown in size and features a different pattern. It comes with a glossy-black coloured strip which sits on the lower side.

Also, the lower grille has shrunk in size considerably and there is a new front bumper with silver-finished skid plate. The bumper now houses a blackened triangular panel on its either sides and instead of squared fog lamps, it now gets more conventional looking round lamps. Over the sides, the greenhouse somewhat remains unchanged but the alloy wheels have a completely new design.

Overall, the new Kicks has design reflections of the Nissan Ariya crossover concept, especially at the front.

While, the interiors are yet to be seen, expect the Kicks to have significant improvements inside the cabin. It will make use of better quality materials, a new infotainment system, new interior colour pattern and upholstery.

The international-spec facelifted Kicks will draw power from a 1.2-litre HR12DE three-cylinder petrol engine. This engine will work in conjunction with a 1.5kWh battery pack. The combined output of the system has been rated at 129 PS.

This is Nissan's e-Power technology which has been claimed to deliver more fuel efficiency and cleaner emissions over the regular ICE setups. Weather or not it will make its way to the Indian model is yet to be seen.

The facelifted Kicks is expected to enter the Indian market later this year. It will come as a 2021 model.