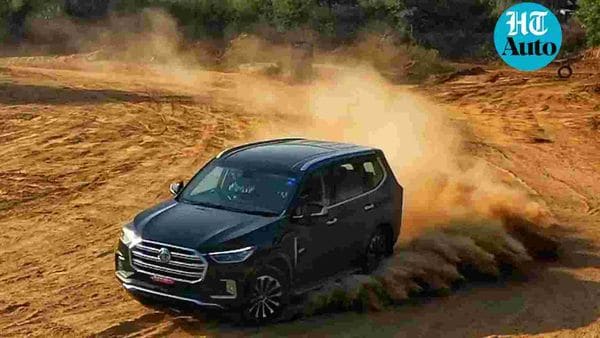 MG Gloster has a formidable road presence in terms of how large the vehicle is. (Photo - Sabyasachi Dasgupta)

MG Motor may have bet big on the Gloster SUV to take on the might of the likes of Ford Endeavour and Toyota Fortuner but it seems like the newly-launched vehicle may be enjoying early momentum in the festive period with over 2,000 bookings received in three weeks. The company also reported a 6% rise in October sales vis-a-vis the same month in 2019.

The announcement was made by Rajeev Chaba, President and MD at MG Motor India, on his official Twitter account. He also added that Hector - the company's debut product in the country - had seen 3,625 retails in the same time period. This is the highest that the SUV has done since it was launched back in 2019. "Thank you esteemed customers to keep faith in MG. Highest ever Hectors done since launch. We are overwhelmed and puts onus on us to come up to your expectations," he wrote.

While Hector sits at a significantly lower price band than Gloster, the Gloster's achievement of receiving 2,000 bookings is rather commendable if not surprising. "With festive demand, we have registered 48% growth vis-à-vis last month. We expect continued traction because of Diwali in November and are ramping up supplies to cater to the increasing demand," said Rakesh Sidana, Director (Sales) at MG Motor India.

MG has managed to bring out a price offensive against rivals by launching Gloster at a starting price of ₹28.98 lakh, going up to ₹35.38 lakh (all prices are ex showroom). It is offered with a 2.0-litre twin-turbo diesel engine, claims to be India's first Level 1 autonomous premium SUV, and gets a host of stellar features like leather seats, a large 12.3 inch infotainment screen in the centre with Android Auto and Apple CarPlay compatibility, 12 speakers and 64 different colour options. Two of its biggest highlights, however, are its luxurious cabin and the off-road capabilities it has.

While bookings' figure do not always translate into actual sales to the number, 2,000 is still quite a decent feat for a vehicle of Gloster's proportions - it stands 5,005mm in length, 1,932mm in width, is 1,875mm tall and has a wheelbase of 2,950mm - and the segment in which it competes in.