MG Motor Astor seeks to play to its strengths as it looks to take the fight to a long list of rivals. A race track may not be its ideal home but there's no harm in showing off a bit, is there? Check out Astor track test review here.
By : Shubhodeep Chakravarty
| Updated on: 30 Sep 2021, 13:30 PM

Astor from MG Motor India will be the company's fifth launch here.

MG Motor has a clear and unwavering focus on SUVs and the latest manifestation of this determined foray into the Indian market comes in the form of the MG Motor Astor SUV. Not that the heavily-populated, intensely-fought mid-size SUV space in the country needed yet another player but there is still a large scope. And MG is hoping that Astor is able to not just enter the fight as a fringe player but flex muscles to mount a credible challenge as well. It may not be easy but does the Astor have what it takes to compete?

The confidence that MG Motor is attempting to showcase was clearly reflected in the choice of the first-drive location in the invite that came - Buddh International Circuit! I'll admit I didn't quite understand just why would I want to drive a car like Astor on a track formerly graced by boisterous F1 race machines.  But by the end of the afternoon session, some of the standout highlights of the Astor became amply clear. Interested, read on. 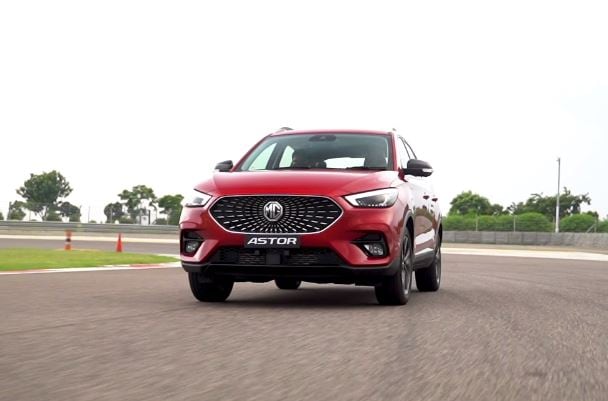 MG Astor is quite at home on a race track even if it will spend almost all its life on roads outside of it.

I know what you're thinking. “Why test a car that on a controlled race track with the ideal conditions to bring out its starry highlights? What about broken roads, speed breakers, the grip on submerged streets, braking when the whimsical cattle suddenly decides to cross the path ahead?" I know because I share the thought.

And yet, it is really only on a race track that some of the other highlights of a car can be put to the absolute test without compromising on safety. As such, engine, gearbox, speed and steering are some of the key points I would focus on below, leaving factors like suspension for another day. 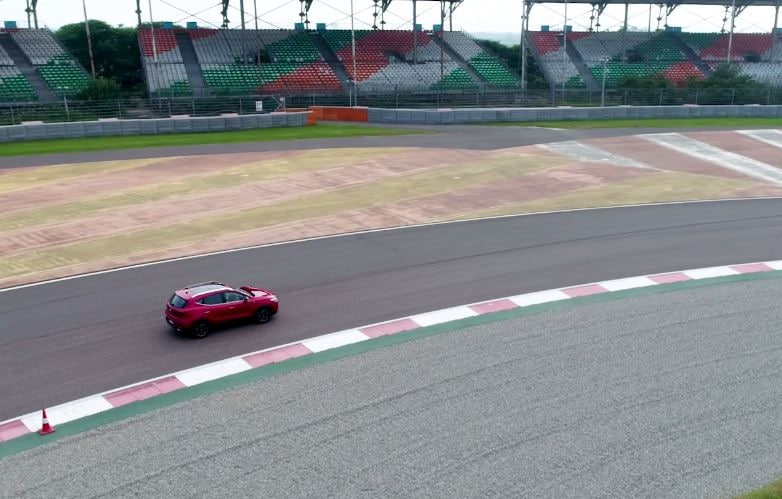 Astor has an easy build up of speed but the braking could have done witha bit more bite.

So, the Astor will be made available in two petrol engine options - a 1.5-litre VTI unit which comes mated to a five-speed manual and a CVT box, and a more powerful 220Turbo which offers six-speed automatic transmission. With helmet on, seatbelt firmly in place, the seat adjusted and ORVMs checked, it was time to head out for two hot laps of the circuit before bringing speeds down for a closer inspection. 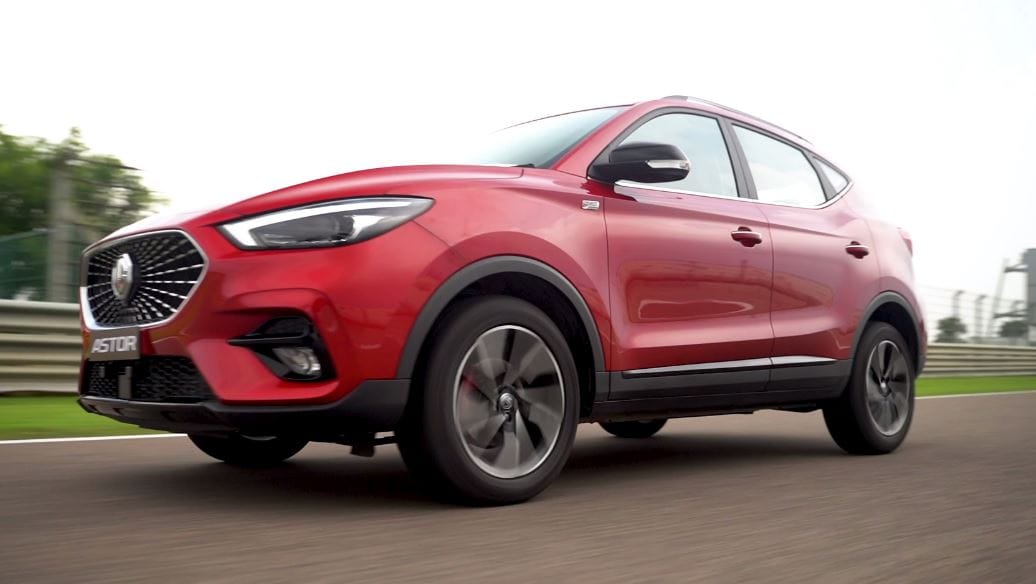 MG Astor has great noise insulation at high speeds but - and obviously - its real test would be out on manic city roads.

What is likely to impress from the word go is the linear buildup of power from the 220Turbo engine under the hood. While it isn't exactly the most sprightly that I have experienced in a car in this segment, it sure doesn't leave you second guessing either. The response to throttle inputs are near instant and the engine gets the momentum going without much fuss. Of course, it helps that the transmission unit hardly breaks any sweat in recognizing and responsing to what is being asked for. 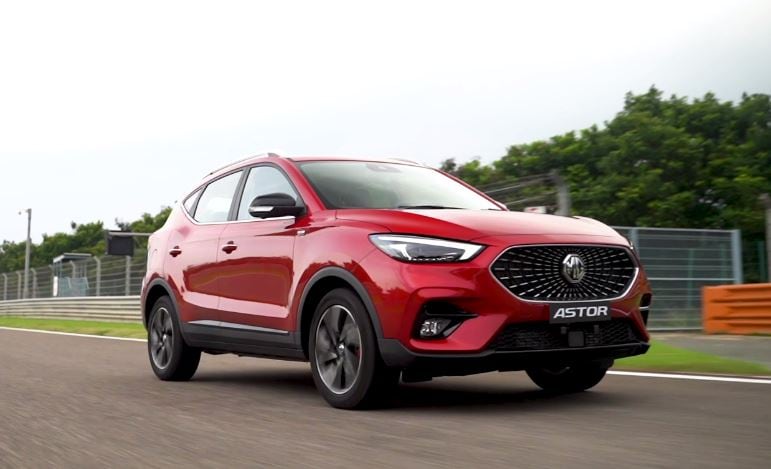 Astor being put through paces at the Buddh International Circuit.

And once the speed does cross the triple-digit mark, the Astor continues to impress with its steady (near stately) traits. Straight lines are doggedly followed and sharp turns on the circuit were mostly managed with distinction. This is helped amply by the fact that there are three steering modes - Dynamic, Normal and Urban. What the first does is adds a bit more weight to the steering for enhanced feedback and control at highway speeds. The other two modes are primarily meant for better maneuvering in city traffic although I wasn't able to test its real-world benefits, if any, on the track.

That Astor does offer some customizable tweaks to the drive experience, however, is great and is more than likely to be a stable yet fun car on open roads. 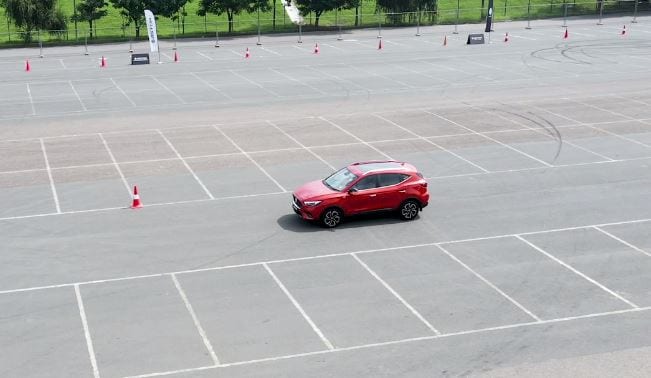 Astor will offer as many as 27 safety features as standard across variants.

The one area where the Astor is likely to outshine all its rivals is safety and the Autonomous Level 2 - first in segment, of course - is the jewel in its proverbial crown. MG Motor has pushed the boundaries and pushed them far for others to play catch up. Astor gets a long list of safety highlights with as many as 27 of these being offered as standard. I was particularly impressed with the Forward Collision Prevention feature which issues warning or can even brake autonomously in an SOS situation. It can detect vehicles in front as well as pedestrians, and has the potential to minimize impact intensity if not completely rule it out in the first place. Then there is the Speed Assist System that can even read road signs to auto adjust the vehicle's speed gradually. And while one can choose to turn it off, having it activated can go a long way in ensuring you don't get those e-challans.

All of these are made possible by a series of cameras and radars around the car but then there are more 'plebeian' safety features too like  Hill Hold Control, Hill Descent Control, six airbags, ABS+EBD, Brake Assist, Emergency Stop Signal, Traction Control System, Electronic Stability Program, disc brakes on all four wheels, 360-degree around view camera, Tyre Pressure Monitoring System and more. 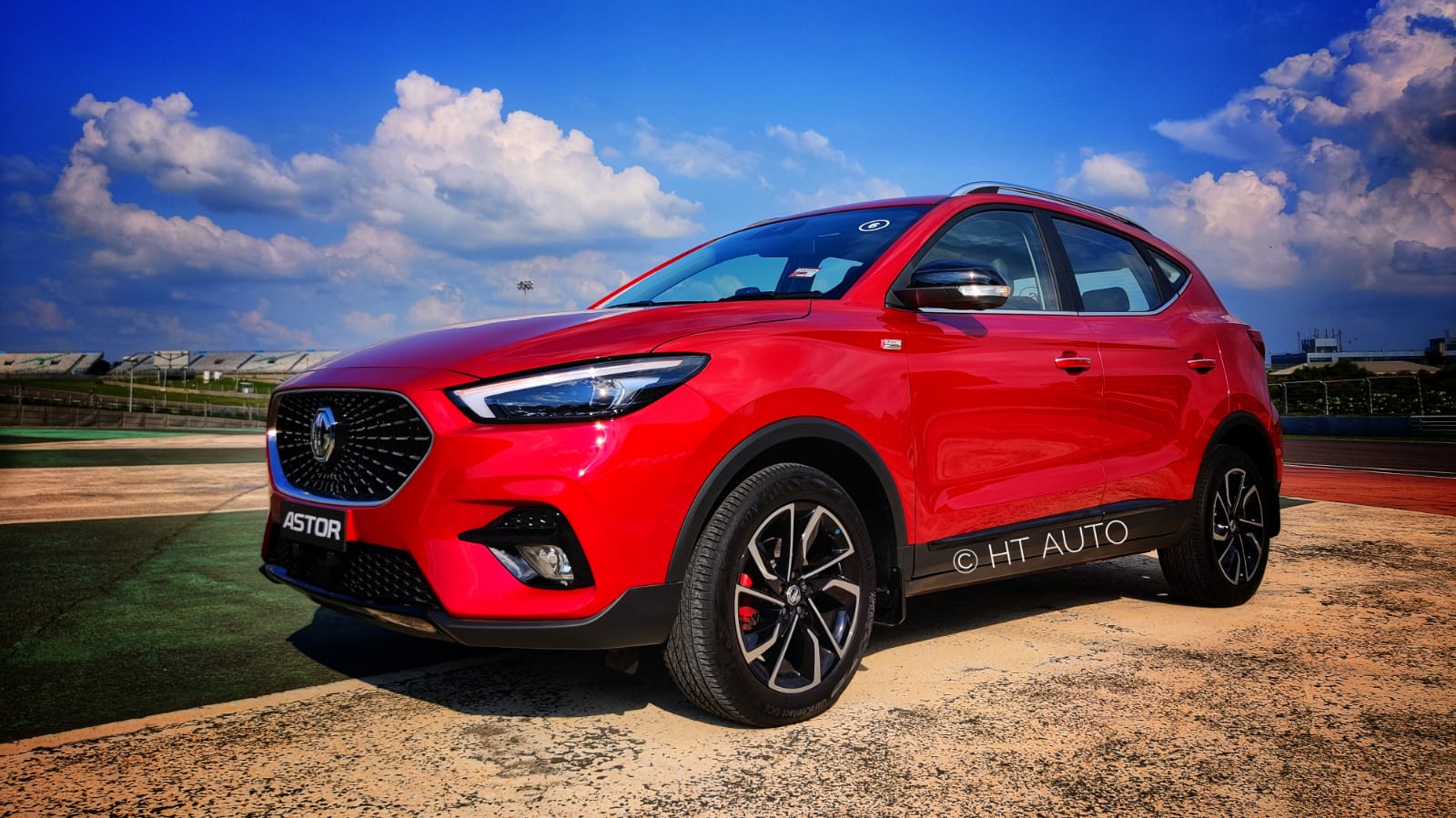 Astor SUV will be offered in five exterior colour options - Orange, Silver, White, Black and the Red in this image.

Astor is near identical to its twin - the ZS EV. And yet, it has its own unique elements on the outside which seek to give it its own charisma. The celestial grille at the front, for instance, looks like the first cut scene from the Star Wars series. There are full-LED headlight units on either side, the alloy design on the wheels are new and the LED tail lights sit on either side of the trunk which gets the ‘Astor’ badge in a prominent form. 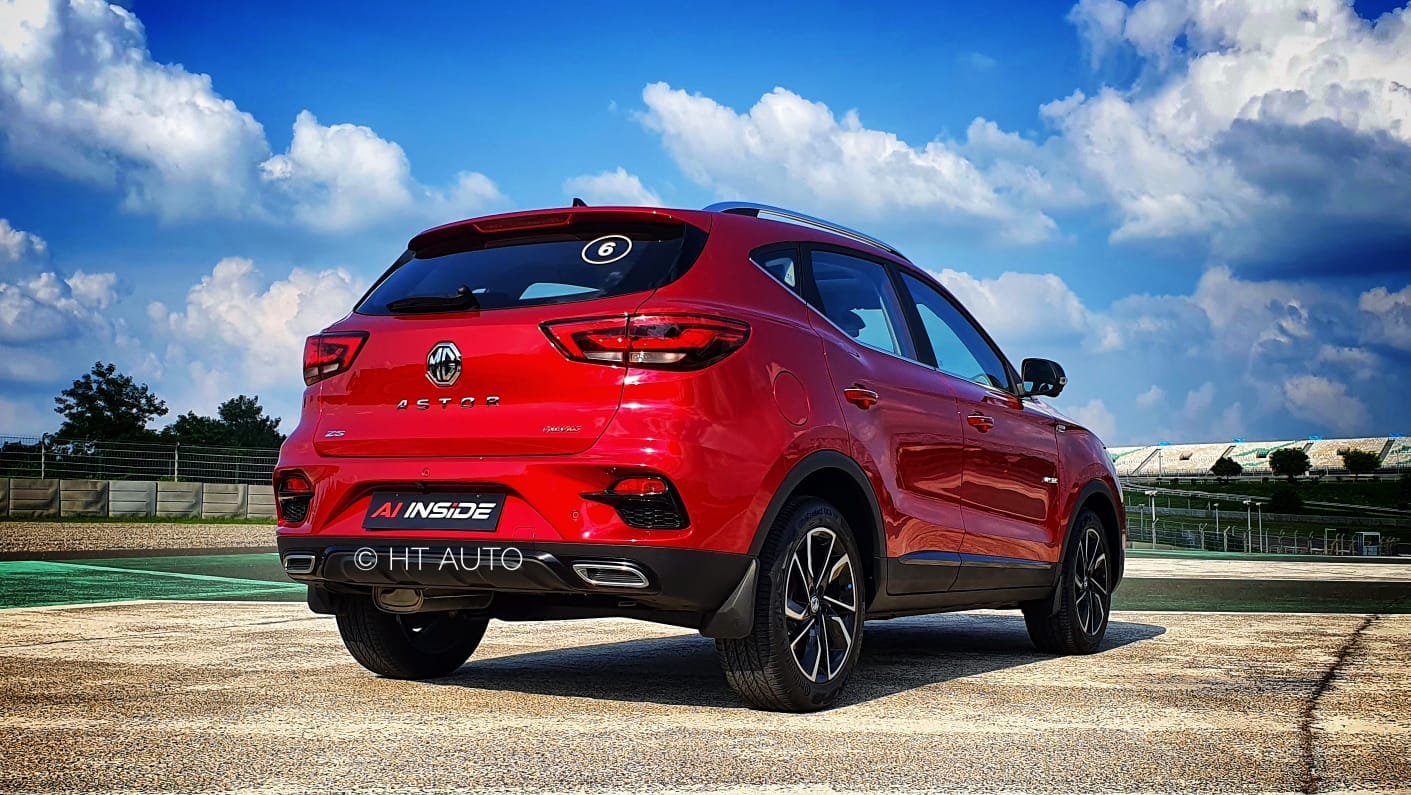 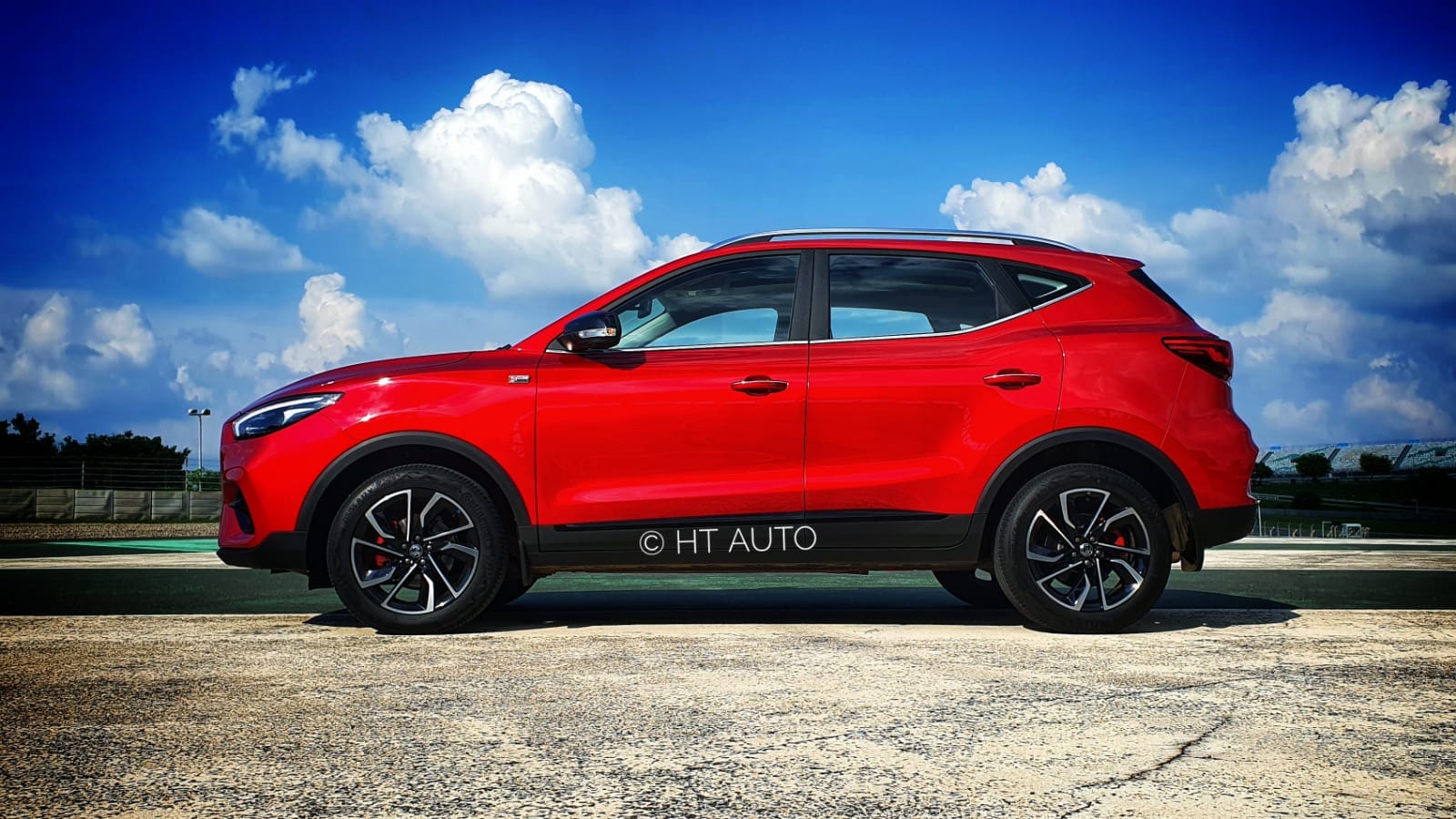 Astor has a 2,585mm wheelbase which translates to more legroom for backseat passengers. 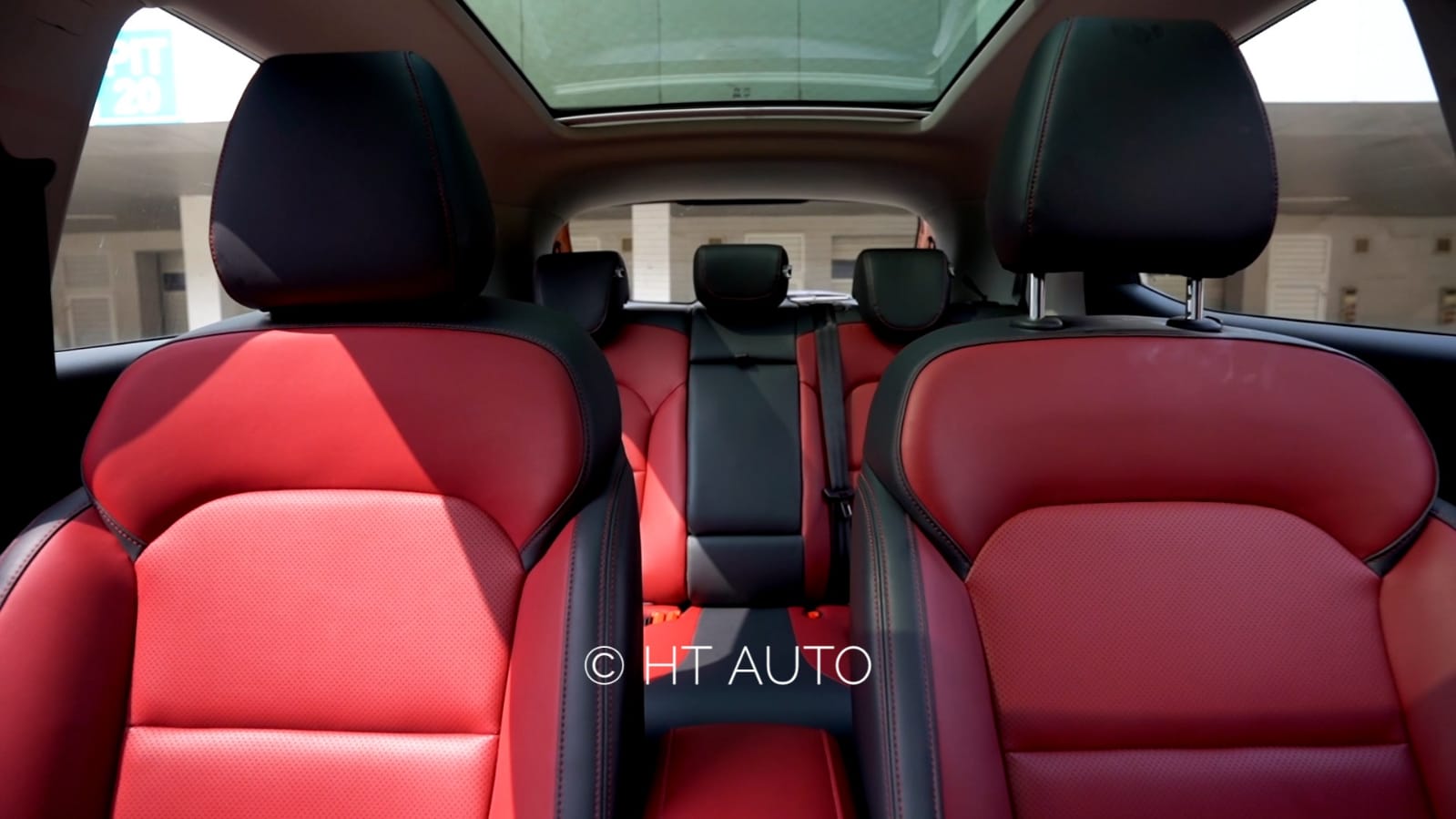 The cabin of the Astor is quite plush with ample use of leather and soft-touch plastics.

Being an MG, the Astor comes loaded to the brim with a mile-long list of nifty feature additions. The list is primarily highlighted by the personal artificial intelligence (AI) unit which essentially works similar to the likes of Amazon Alexa devices. Check out the video below for all the details about the cabin of the car:

There is also a lot of rear-seat space inside this SUV and three people here would likely be comfortable even on longer journeys. But while knee, leg and headroom is quite good, the under-thigh support is paltry. 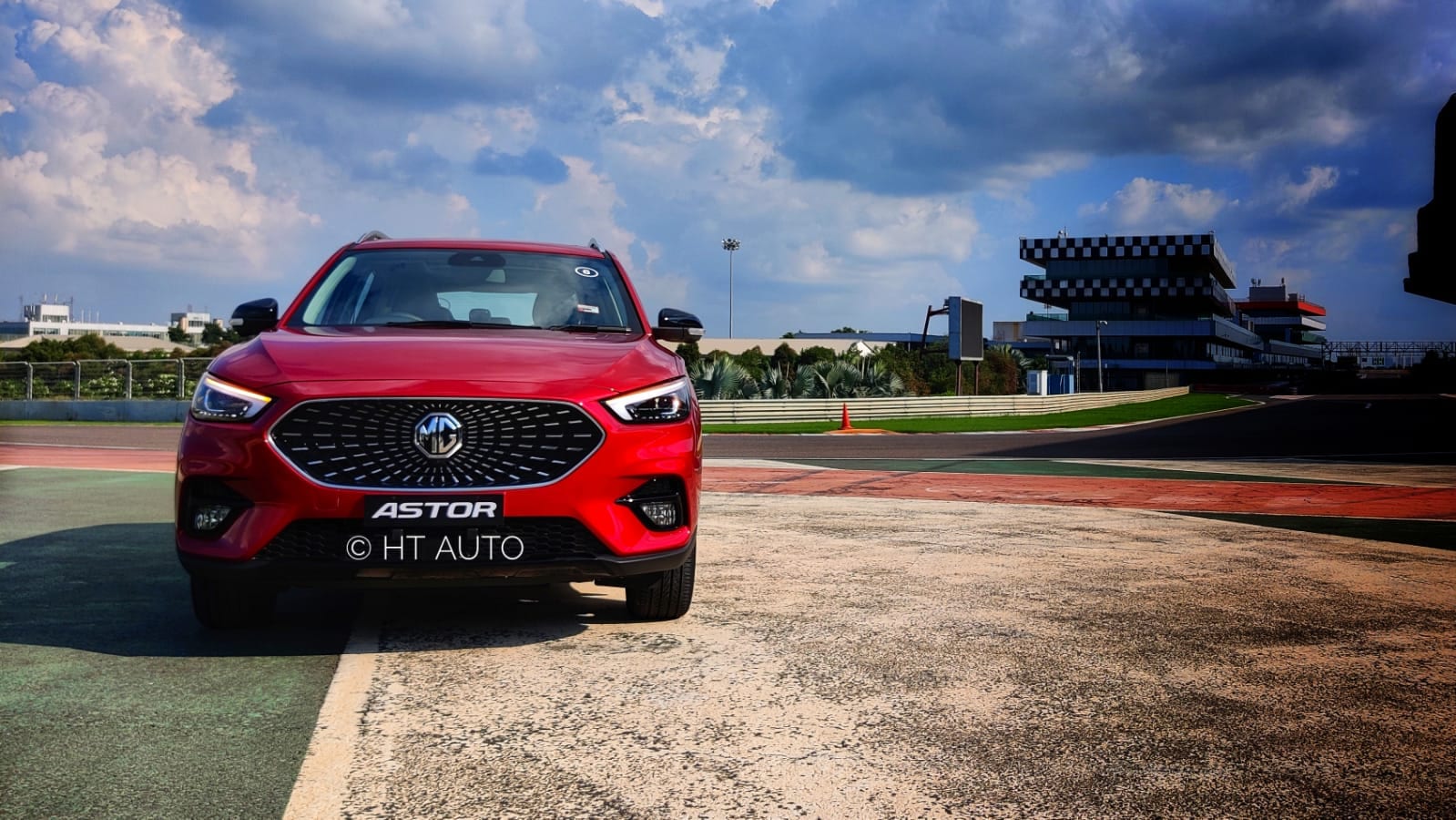 MG Astor could well take the fight to newer and just-launched mid-size SUVs in the Indian car market and has the feature and safety highlights to make a solid case for itself.

Full marks to MG Motor for getting a product ready which plays to its inherit strengths rather than looking at engaging in a one-upmanship battle against rivals. Plush cabin, loaded with features and cutting-edge safety highlights are the inherent strengths of Astor even if it doesn't quite have the boistrous road presence of an SUV. Once launched, it will take on a long list of competitors which includes Hyundai Creta, Kia Seltos and Tata Harrier as well as the just-launched Volkswagen Taigun and Skoda Kushaq.