MG Cyberstar gets the green light for production 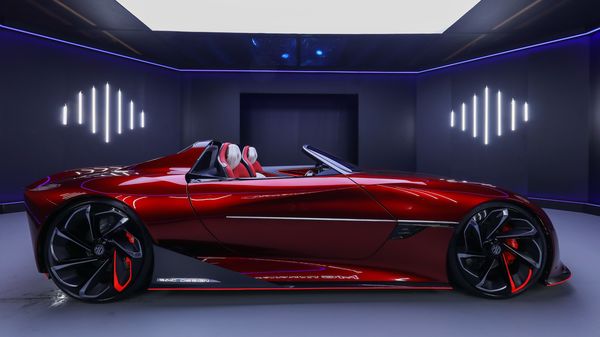 The MG Cyberster electric sportscar made its official debut at the Shanghai Auto Show.

MG Motor has garnered pretty much attention with its recently unveiled MG Cyberster electric roadster concept that debuted at the Shanghai Motor Show in April 2021. Now, SAIC, the parent company of the British car brand has given it a green signal for the production of the Cyberster, after it witnessed a successful crowdfunding campaign.

The production confirmation of the MG Cyberster was not announced by the British car brand itself, but its Chinese parent group SAIC. The company had initiated a crowdfunding campaign for the project through the MG CyberCUBE platform, where the interested buyers could donate $156 to get the first batch of Cubersters.

The automaker received around 5,000 investors investing 5 million yuan or around $780,000. However, this amount is unlikely to back manufacturing of a single MG Cyberster, let alone 5,000. But SAIC feels that it has enough initial interest in the electric sportscar concept to bring it to series production.

Speaking about the concept car, it gets a fluid design. The Cyberster showcased at Shanghai had classic round 'Magic Eye' LED headlights that open when switched on. There is a slim grill design with a thick mesh pattern, which reminds us of the original MGB Roadster from the 1960s.

The alloy wheels deliver a muscular vibe, while the rear gets Union Jack-inspired LED taillights. The overall design of the MG Cyberster appears very crafted-looking.

It is not sure, how many original design elements of the radical-looking MG Cyberster will make it to the production model. Also, the company is yet to reveal any timeline of the production of the Cuberster.

MG Cyberster is claimed to be capable of running 800 km on a single charge and it can accelerate to 0-100 kmph in less than three seconds.