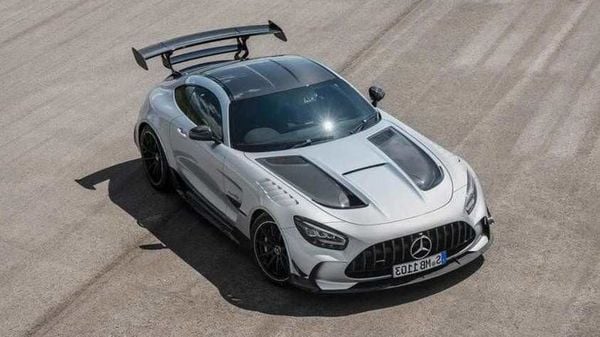 Mercedes-AMG GT Black Series sportscar has broken cover. It has the most powerful series-production V8 powertrain that AMG has made till date. Some of its key rivals include other track-focused offerings such as the McLaren 600LT and the Porsche 911 GT2 RS.

It sources power from a twin-turbocharged 4.0-litre V8 engine that's good to deliver 730 PS of maximum power and 800 Nm of peak torque. The engine comes mated to a 7-speed dual-clutch automatic gearbox which transmits power to the rear wheel. For the record, this is close to 145 PS/100 Nm in excess to the next-fastest GT R Pro variant.

In comparison to the other GT models, the Black Series gets significant weight reduction thanks to the heavy usage of carbon fibre. From bonnet, roof and tailgate, details including the transmission mount, body stiffening structures and driveshaft, all are made up of carbon fibre. It also gets lightweight forged wheels. Its suspension setup comprises the adjustable coilover units combined with an adaptive damping system.

In terms of exterior appearance, it gets a motorsport theme which looks similar to the one found on the Mercedes’ GT3 or GT4 racing cars. The GT Black Series features completely new interiors which syncs leather and microfibre fabric along with black and orange stitching and matt black carbon-fibre trim. Optional on the list is carbon-fibre bucket seats and the AMG Track Package. By choosing the latter, customers can get titanium rollover protection, four-point belts and a fire extinguisher.

As far as Indian market is concerned, the launch isn't confirmed yet.